Home > A Brief History > The Grandfather of Porsche – Type 64 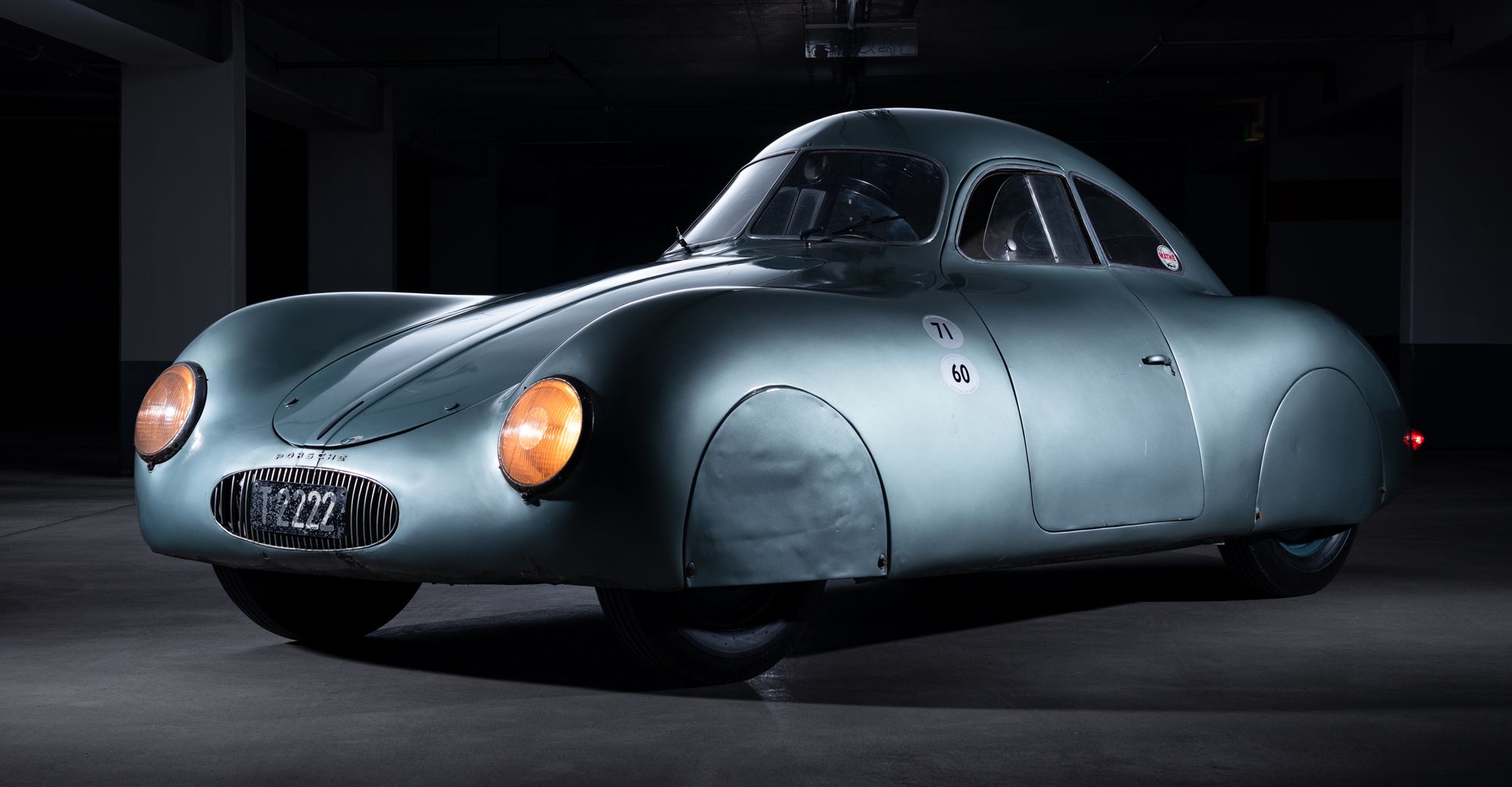 When discussing the “first Porsche” – most would tell you that the 356 is the correct answer. However, predating the 356 by 9 years, came the Type 64, with only 3 produced. Despite the Type 64 being made before the Porsche motor company had even been formed, it still is clearly recognisably a Porsche. This was the “test” of the Porsche families dream to go on to create incredible sports cars. This car is the beginning of Porsche.

The engine was the same used in the very early Beetle engines, a 1.0 litre flat-4 with 32hp with a top speed of 88mph. The engine was positioned behind the rear axle to keep the small frontal area for aero-dynamics and is why Porsche continued to create rear-engine vehicles further into the future. Due to the engine and other components coming from the Volkswagen Beetle, the assumption was that it was sitting on a Volkswagen chassis, however it was recently discovered that it wasn’t. It was on an entirely differently constructed chassis, and was using aerospace grade materials. The body is riveted in place with 2000 rivets, meaning this car was made using aircraft technology. Porsche’s approach was very different to the conventional usage of “more power” and essentially, brute force. Instead the Type 64 was incredibly lightweight and used existing technology to make it fast.

The interior design of the vehicle was rather bizarre. The seat was positioned onto a flat floor and unable to adjust, with the driving position canting your legs to the right, as the fuel tank was directly in front of the steering wheel. The throttle pedal design, was a small rotating wheel, instead of a flat pedal, to allow you to push further forwards without your foot getting stuck as you accelerate.

The first of the three Type 64’s, chassis 38/41, was built on request from the German government, to promote it’s power in the 940-mile Berlin to Rome endurance road race and to show-off the newly built high-speed autobahn. Originally created in black, but later in 1950 resprayed to a beautiful colour with silver accents with hues of blue and green patina. The Type 64 never got to enter that race due to a few months later came the beginning of World War 2. The car was then acquired by the head of the German Labour Front, Dr. Bodo Lafferentz. Sadly, the new owner damaged the car in an accident in 1939, and after an ownership period of just 10 months, in 1940 this vehicle was returned to Dr. Ferdinand Porsche.

Although due to the events of the second world war and the cancellation of the Berlin-Rome race, Ferry Porsche proposed that they continue to build a second and third model for testing and experimental purposes. Within 3 months, the second Type 64 was produced, chassis 38/42, was made. This car sadly suffered the worst fate of the 3 examples, in 1945 American troops under the U.S. Seventh Army’s “Rainbow” division seized the vehicle, cut off the roof, and took it for a joy-ride until they had run the car into the ground. It was left as scrap after they had blown the engine up. This particular vehicle has been rebuilt and is now under the ownership of the Peterson Automotive Museum in Los Angeles.

June of 1940, the 3rd model’s body was made, however not fitted onto any chassis, as this was near the same time of Lafferentz crash. Resulting in the 3rd model becoming the donor to repair the original vehicle, with the engine being under the number 38/43. Sadly the body of the 3rd car was destroyed during WW2. This has resulted in only 2 surviving historical models, and 1 of which that survived in near original condition to modern day.

Chassis 38/41 ownership is amazing. Outline below:

46 Years owned by the private race-car drover Otto Mathé, who used to enjoy racing motorcycles between 1920’s-1930’s until he had a bad accident in 1934, leaving him without the usage of his right arm. This never stopped Mathé’s passion for racing, and during his ownership, he changed the drive position to right-hand drive so that he could race the Type 64 and shift with his left hand. This was one among other modifications done to the car, he modified the engine’s displacement so he could enter the 1,100 cc races. Later, in 1951, Mathé had less successful attempts in the 1951 Austrian Alpenfahrt, which encouraged him to install a 1.3 litre engine in 1952. The results of the modifications aided Mathé in his racing career, and the Type 64 meant it performed incredibly well during different races. After 1953, the car was used less in racing by Otto Mathé, and was placed in his private museum, and driven for leisure. Due to his persistence in racing and his fearless motivation, he became an admired legend of the period.