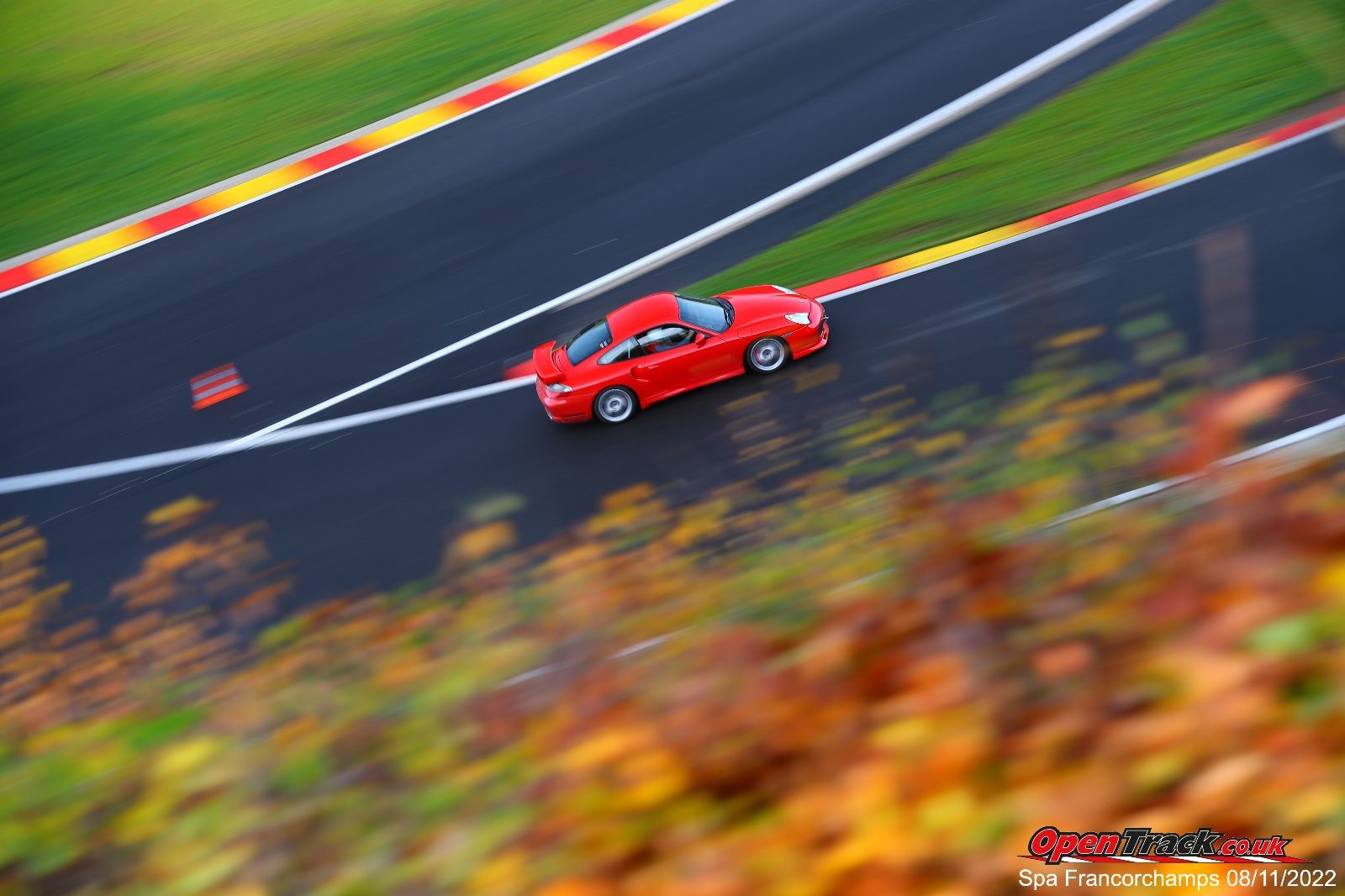 The team here at Purely Porsche will go to any and every track day we possibly can, because of course, why wouldn’t we? When we do, you’ll see us on track with what might look like a normal Guards Red 996 Turbo. At least, on the outside! However, once you open the door and look inside you will be greeted by stunning, matching red Recaro racing seats and roll-cage. These are the first of many and the most obvious of the none-manufacturer upgrades that you will see. Around the back and in the engine bay, is where you’ll truly appreciate just how different the car is. Now running at a whopping approx. 1,000hp, the PurelyPorsche 996 Turbo is a track beast. As we often get asked many questions about the special car, we decided we would start up a several part series that will show a “warts-and-all” experience of what ownership with a heavily upgraded Porsche is like.

To start this series off, our most recent track experience was none other than the Circuit de Spa-Francorchamps. On day one, the weather was unfortunately not on our side, with grey clouds overhead and a light downpour all day. A wet track is not ideal for driving at fast speeds with the incredible Cup2’s tyres fitted, but it was the perfect opportunity to try out the newly fitted ceramic brakes. The braking has always been the biggest concern for the car due to the amount of power. The car has previously had upgraded brakes, but brake cooling issues frequently occurred, so then the cooling ducts were upgraded to those on a 996 GT2. A few months back, the owner looked into ceramics, and Surface Transforms came up with the answers, making this the world’s first 996 Turbo with Surface Transforms ceramic brakes.

Day 1 on track started early, with us being one of the first cars out on the sighting laps. A few laps in on the wet track, the driver was warming up the tyres and testing the brakes. After everything was warm, it was time to come back in and we dropped the tyre pressure down to 30 psi all round, got straight back on track to get more heat into the tyres and more bedding on the new brakes. The driver then came back in again to check all was as it should be and had to drop the psi down to 30 again, as it had gone up with the heat. Back out for the third run and that is when something completely strange happened! On turn 10 all braking was lost, which instantly set in emotions of worry and dread (not to mention the huge amounts of adrenaline for both driver and passenger). The pedal for the brakes felt completely fine, however the car was not slowing. Luckily, the driver was able to steer the car round turn 10 and through turn 11 using some of the curbstone. Once out of turn 11, the driver dabbed the brakes, and to his surprise they were now fully back and functioning as normal. It was not until much later did we learn what had happened…

This braking issue caused a lot of worry for the safety of the driver, so the natural next thing we did was get the car straight back into the pits to check it over. We would not consider ourselves as experts, but the brakes all appeared to be completely fine and functioning. We sought out advice from others with more knowledge than ourselves, and nobody could give an answer to the strange malfunction. One of the many upgrades on the Turbo is methanol injection located in the “frunk”. Whilst seeking clarity on the brakes, we decided it best to check on the methanol levels and we were met by another bad surprise upon opening the front boot lid. The front storage compartment had turned into a small methanol-lake and was around 2-inches deep. Knowing how dangerous and flammable this liquid is, we acted fast, with the only items we had available; and proceeded to mop it out the best we could with cloths. This was a long process of soaking the cloth in methanol, draining it out and repeating, whilst we also used water to wash the liquid away from the outside of the car towards a drain. The first thought was that the methanol lid wasn’t secured properly, but that’s when we noticed that the pipe which injects the meth was in fact leaking from either side of the filter. We weren’t sure exactly how it was leaking and had to leave the front boot lid open for approx 30 mins for the remaining methanol to evaporate away (this process is much faster than water). While we left it, we noticed that time had flown by and it was already lunch, not a successful start to the 2-days of Spa.

During the lunch break, we brainstormed, desperately thinking of ideas to save us from having to go home with our heads low and car broken. After some phone calls, we discovered how to turn off the methanol & boost function all together. Of course, without the boost function we dropped a large amount of horse-power, but all of that doesn’t matter as it’s about enjoying the car and the track. We then thought it time to take the car back onto the track to test that this worked, one lap round and after an inspection we found that it was a success. After a few more laps to get the tyres heated back up and to test the braking some more, all was good. We ended day one optimistic and ready for a full-day on the track tomorrow.

To our delight, day two came with no rain and we were soon greeted by beautiful sunshine. When we got to Spa circuit, we were beaming with smiles to see the lovely dry surface. To start the day we got straight onto the track to warm up the tyres again and got the psi to normal track-day levels. During the warm up, immediately we could feel the benefits of the 996 on the dry surface, and tested it’s abilities hitting the corners much faster than the day before. It could get round the corners fast, but the car was wallowing a little so we returned into the pits and this time adjusted the front suspension. We hardened it by 3 clicks, now running on zero clicks on the rear and 3 clicks front. This sorted it, and the 996 Turbo felt amazing, now taking corners at incredible speeds.

Enjoying ourselves, we decided to take a quick break to have a coffee to recharge and then head straight back out . Whilst pitted, one of the team spotted fluid running out from the offside near the front wheel. Upon checking it, we realised that it was methanol. Due to the amount of methanol that had spilled everywhere on the first couple of laps of day one, a curious driver who was having a break at the same time as us, pointed out that methanol very quickly freezes, which is when a “lightbulb-moment” came to us to this being the cause of the failing brakes. We believed that it most likely got sucked into the brake cooling ducts and got onto the brakes, causing them to stick and briefly fail.

After we finished our coffee, the driver, and owner, of the Porsche offered his son, who was travelling with us, to experience the car on track. So handing over the keys, and a lengthy lecture to “NOT TO BREAK THE CAR”, off he went. I went in as a passenger, since the driver felt sick with nerves, and to give credit where due, he is a fantastic driver. I did 2 laps and returned in (I get very bad motion sickness as a passenger and thought after cleaning up methanol on day one, we wouldn’t want to clean up my bodily fluid on day two). He continued to drive the car, and on his fourth lap back on the track he came in to tell us he felt he lost all gears apart from 2 and 4. Came back in for inspection by the owner and after 5 minutes he felt everything was okay and the gears felt perfect. We put it down to possibly just experience driving the Porsche, and upon returning it back to the owner, the Guards Red Turbo was back where it belonged again, on track. All was feeling great, the sun was still out and the day from here on went perfect. Leaving all the dramas very far behind, we got some blinding laps on track. Even with the methanol boost turned off, it was a nice opportunity to prove just how fast the car still is. The tyres were sticking to the tarmac, the suspension was keeping it planted and all that was left to do was play.

This trip was one to remember, but also one that came with a few technical problems. Overall, we feel that these new challenges came with new understanding, and looking back it was an amazing time regardless. We would recommend you to test on the circuit at Spa, and wish you to have a problem-free experience. Hopefully, you will see us there and if you ever need any help, we are always willing to lend a spanner.

Got a good story you would like to share in your Porsche? Contact us, we love to get involved with owners and all of their experiences!