The new 992 GT3 RS is finally here and it’s time to find out what this crazy machine has in store for us! In our latest article we’ll be exploring this extremely powerful work of art!  We’d like firstly to extend our congratulations and adulation to everyone at Porsche, it’s no small feat and we’re sure it’s been an exciting ride – although probably less so than driving it!

We’ll be exploring the ins and outs of the most anticipated 992 to date! 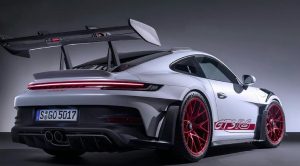 The new GT3 RS has a horizontally opposed-six, naturally aspirated, 4 litre engine that puts out 525 horsepower. This is 15 more than the regular GT3 and 5 more than its predecessor. Porsche have actually been using these flat 6 engines in the 911 exclusively since 1963.

The maximum speed clocks at 184 mph, which is actually 30 mph less than the GT3. This is due to the extensive work that’s been done on the aerodynamics of this vehicle. More about that later.

The car will reach 60mph in 3.0 seconds and after 10.9 seconds it will have done a quarter of a mile.

In the GT3 you can choose between a manual gearbox or a 7 speed PDK automatic. We won’t get that choice in the GT3 RS as this will have the PDK as standard. It isn’t the exact same dual clutch transmission though as the engineers have shrunk the final drive ratio to improve the acceleration across all 7 gears.

The car weighs in at 1450kg which is ever so slightly heavier than the GT3. However, as mentioned before, the GT3 doesn’t have the same aerodynamic upgrades as this delight does.

The 20 inch aluminium front wheels are set up with 275/30 ZR 20 Sports tyres. Where as the rear wheels are 1 inch bigger and come with 335/30 ZR 21 Sports tyres. The vehicle comes with 408mm steel front brakes with 6 piston calipers and 380mm steel rear brakes with 4 piston calipers. These calipers are actually 2mm wider than the GT3 for a better grip.

You can of course upgrade to the carbon ceramics. This will give you 410mm front discs and 390mm at the rear. Porsche claim that with these fitted the car actually has the shortest stopping distance of any Porsche road car. They haven’t shared the numbers on that yet, so we’ll have to trust them on that for now.

The biggest difference in the design is definitely the rear of this vehicle. Even though they’re using the same diffuser and dual-centre exhaust as the GT3, this rear wing is simply massive. This thing is actually taller than the roof of the vehicle!

The front bumper has stayed similar to the GT3, however it’s a little wider and lower. Behind this bumper is an S-duct single-cooler concept. This system replaces the luggage compartment. Due to this concept the aerodynamics improve, in particular in relation with downforce and brake cooling.

It is a big jump from the otherwise used two side coolers and a smaller centre cooler. As a result the air vents in the bonnet are also slightly bigger and meaner than before. 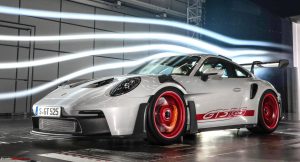 Nothing to do with aerodynamics but just a little fun fact: The red graphics on the side are a little throwback to the 2010 997 GT3 RS and the big crease in the doors are based on the road version of the 911 GT1 Le Mans car from the 90’s.

As mentioned before this vehicle is all about downforce and creating the best cornering speed possible. This is why the top speed is not as high as the GT3. The splitter is much bigger and they have redesigned the radiator to make more use of the airflow under the bonnet. The hot air now goes up through the bonnet and around the cabin of the car.

More intakes in the bumper will push the air behind the standard LED headlights to then flow over the specially designed tear shaped suspension control arms. This neat little trick borrowed from F1, gives the GT3 RS an extra 40 kg of downforce when it is maxed out. 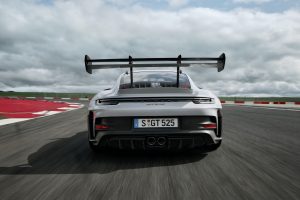 On the roof you’ll see 2 vertical fins that will guide the hot air away from the air intakes under the rear windscreen. Which means the massive intakes behind the doors don’t actually feed any air into the engine. they push the air through the rear wheel wells and out through the vents in the rear bumper.

The rear wing on this 911 is just absolutely phenomenal! It is overall bigger than any wing Porsche have ever put on a road car before. And this thing produces a whopping 860kg of total downforce at 177mph. This double the amount of downforce of the previous GT3 RS. That is just mind-blowing and I can’t wait to see it break records on tracks around the world.

The wing is fitted with a Drag Reduction System (DRS) that you can activate on the steering wheel. With one push the hydraulics will open up the upper flap to help the vehicle slice through the air like butter. There is more, when you brake hard the same flap closes to turn it into an airbrake.

Porsche have also upgraded the suspension geometry as they’ve made the track wider by 23mm. This design will also reduce the deflection of the front axle so basically it stops the nose diving.

Most of you will know that the launch of the GT3 RS follows on from the GT3 R announced earlier in the week. The GT3 R is the motorsport cousin to the road-legal “RS”. If you haven’t yet seen the GT3 R, then feast your eyes on this! 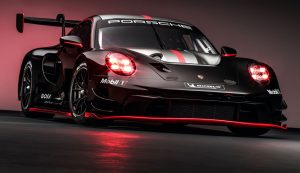 Porsche’s new GT3 R is available as a track-only racer, should a customer wish to compete and have ownership in the best-of-the-best motorsporting experience. In fact, customer feedback is what led to the development and design!

So, onto the technical bit.

It will come as no surprise when looking at this, that it uses the base from the GT3 road-car, however everything in it has been modified and made that little bit better. To quote “it is a revolution of the revolution” from Sebastian Golz, Porsche Motorsport Project Manager for the 911 GT3 R. So many details have been worked into this car, with the main focus being the drivability.

Weight distribution is improved, with more shifted forward to help with tyre-wear, whilst maintaining great stability. Visually, you can see the changes with the front short-lip, air intakes, and the rear wing being support from the top rather than the bottom – all of which is to improve drivability. Sebastian’s team then looked at the interior too – pedal box position, steering wheel position, easy-reach areas, less buttons overall: improved functionality. They didn’t stop there, with the engine, the drivetrain is changed from 4.0l – 4.2l, with instant torque and high revs up to 9,000RPM.

Part of what makes the new GT3 R so visually stunning, and improves stance, is the increased width and wheel-base. 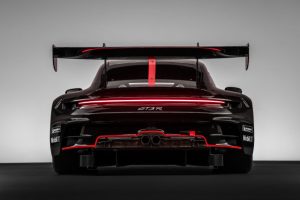