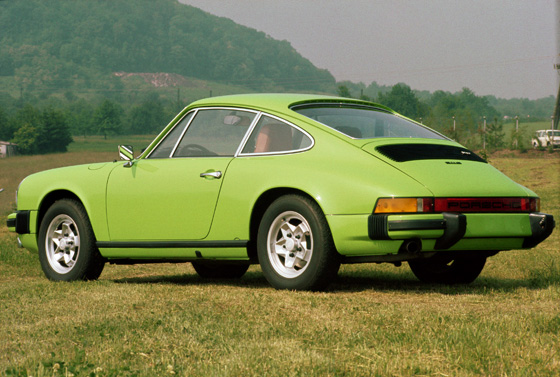 The G series, Porsche realigned its model line-up. The 911S was no longer the range-topping car but rather a mid-range model comparable to the previous 911E.

It ran a 2.7-litre engine equipped with Bosch K-Jetronic fuel injection that produced 175bhp in rest-of-world form. However, in the USA increasingly demanding emissions regulations meant that, for the H series cars in 1975, the engines were fitted with air-pumps which, basically, diluted the exhaust gases with fresh air but at the same time knocked 10bhp off the maximum. The same year, cars for the Californian market for fitted with thermal reactors and exhaust-gas recirculation (EGR) systems that reduced the maximum output to 160bhp.

In other ways, the 911S was similar to the entry level 911, and adopted the same improvements. The impact-absorbing bumpers transformed the cars looks, as did the full-width rear reflector, while new elephant ear door mirrors appeared on the I series version for 1976. Inside, the 911S also followed the basic 911, and had that cars same four-spoke steering wheel.

Today, if buying a 911S of this age, it’s important to bear in mind that it was no longer the range-topping car, that privilege went to the 911 Carrera.

Targa: The 911S was available with a removable Targa roof, as per the contemporary standard 911.

Signature 911S Sold in 1976, this limited edition was finished in Platinum with colour-coded wheels, tweed seats and a three-spoke steering wheel with Ferry Porsche’s signature embossed into it.