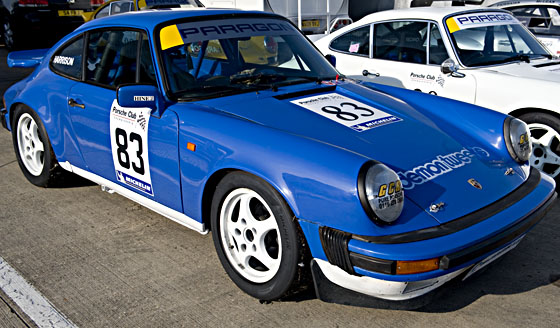 Today, the Carrera 3.2 is the archetypal 1980s Porsche, especially when finished in bright Guards Red paintwork. It is, however, not that different in appearance to the 911SC that preceded it.

Introduced in 1984, the Carrera 3.2 had essentially the same galvanised body as the outgoing SC, albeit with a new front spoiler with integral fog-lamps. The interior was also very similar to that of the SC, with just revised seat fabrics and trims.

The engine, on the other hand, was claimed by Porsche to be 80 per cent new, although still based on the SC’s 3.0-litre unit. Capacity rose to 3164cc by way of larger 95mm barrels and a shorter 74.4mm stroke crankshaft. Pistons with raised crowns increased the compression ratio to 10.3:1 on all but North American cars. But the Carrera’s main innovation was its Bosch Motronic 2 engine management system. This was the first production 911 to feature an ECU to control the ignition and fuel systems. In addition, the fuel injection was updated to Bosch LE-Jetronic and the induction and exhaust systems were revised.

The upshot of these improvements was that power rose to 231bhp at 5900rpm, with torque hitting 284Nm at 4800rpm. However, Porsche claimed fuel consumption to be 10 per cent better than that of the SC, because of the greater efficiency of the electronically controlled engine.

The 3.2 Carrera also saw the introduction of hydraulic tensioners for the cam-chains. At a stroke these eliminated what had long been a weak point on 911 engines mechanical chain tensioners. The hydraulic items were fed by the engine’s oil system and have since become an essential update for earlier 911s.

Initially, the Carrera 3.2 was offered with the same 915 gearbox as the SC, albeit with revised ratios to give more relaxed cruising (and better economy) in fourth and fifth gears. However, in 1987 the car was treated to the new Getrag G50 gearbox which offered smoother changes and a shorter, more modern-looking, gearlever. You can tell the difference between the ‘boxes by the fact that on the G50 reverse is to the left and forwards, whereas on the 915 it’s to the right and backwards. At the same time, the clutch changed from cable to hydraulic actuation. Today, these later cars are more sought after than the earlier 915-equipped models.

Also in 1987 the interior received larger air vents and a more efficient heating system, while the reversing lights and fog-lamps were integrated into the rear reflector unit.

The Carrera 3.2 was a popular model and was phased out in 1989. Today, it’s gained a reputation for being reliable and relatively affordable to own and run. It’s not the most exciting 911 ever, but for many it’s an ideal first foray into 911 ownership.

Open the driver’s door and sink into the leather-clad seat and although there’s no logical reason for it, 3.2 Carreras always feel somewhat more solid than the SC which it replaces. The door shuts with a reassuring ‘clunk’ and everything feels hewn from stone a cliche, perhaps, but it’s the best way to describe the way this car is built.

Look around the cabin and it’s all strangely familiar. Which is not surprising because it’s basically the same dash layout that debuted with the first 911 in 1963. And continued up to 1996 with the later 964- and 993-model cars. In black leather, it’s all very cosseting and cosy. It smells right, too, with a mix of hide and engine oil but certainly not plastics caressing the nostrils.

Start the engine and the sound is unmistakable 911. Blip the throttle and the flat-six roars behind your back, as only an air-cooled Porsche engine can.

The long gear-stick is incongruous in a car from the late 1980s but at least the late-type G50 transmission is reasonably slick to use.

It’s a nimble little car, too, with a lighter, more direct feel compared to the later 964- and 993-model 911s. Well, lighter at speed at least the non-assisted steering is heavy when parking, having to drag those 195/65VR16 tyres across the Tarmac.

On the move, though, the steering becomes almost too light, with every bump or undulation in the road feeding back to the steering wheel. On the plus side, though, the slightest movement of the wheel translates into a change of direction. This really is seat of the pants motoring, and a lot of fun as a result.

In true 911 fashion, the front end feels somewhat light at high speed, almost as if it’s trying its best to leave the ground. Which, of course, with all the weight of the engine behind the rear wheels, is not surprising. The 911 has often been criticised for its unique dynamics, but I think it simply adds to the car’s appeal. After all, it makes each corner an adventure. Approach a bend right and the car will negotiate with remarkable aplomb. Get it wrong and the infamous over-steer kicks in, requiring some quick thinking to avoid an embarrassing and potentially expensive encounter with the verge.

This car gives you the classic 911 feel, but with more power, better handling and unrivalled reliability and longevity. There’s something very easy and familiar about these Porsches. They’re not the most exciting 911s to drive, perhaps, but they’re undemanding to live with on a day-to-day basis. Now, don’t take that the wrong way I’m not saying that the cars are dull. Far from it, a 3.2 Carrera is rewarding and fun car to own and drive, but it’s not extreme. It’s like an old friend faithful, reliable and always there for you!

Targa Similar to the SC Targa with its removable roof panel.

Turbo Look You could order early Carrera 3.2s with the wider Turbo body-shell and in 1985 this became a model in its own right, known as the Turbo Look in some markets. In the UK it was first called the Sport Equipment (SE) and then Super Sport from late 1986.

As well as the body shell these cars also benefited from the Turbo’s brakes and suspension.

In 1988 875 special Anniversary Carreras were produced to mark 25 years of 911 productions. They had no ‘Carrera’ badge on the rear, and inside were blue leather seats with Ferdinand Porsche’s signature on the backs, and a commemorative plaque on the glove-box.