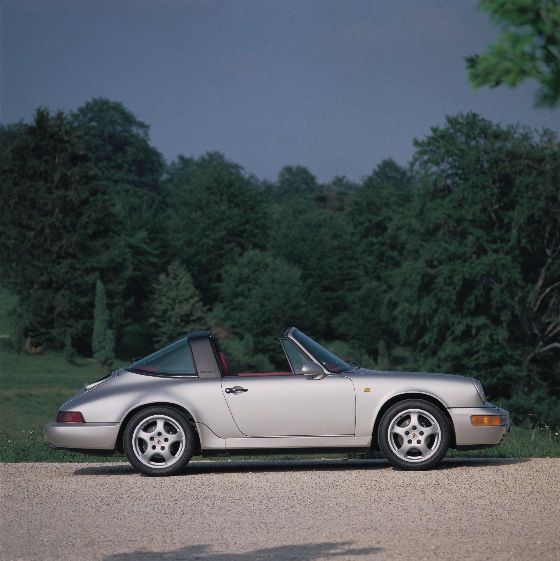 The new Carrera 4 was technologically advanced with its four-wheel-drive but there was always going to be a hard-core of enthusiasts who’d want their 911s to be driven by the rear wheels only. So in 1990 Porsche introduced the 911 Carrera 2.

This car was visually identical to the Carrera 4 but had a simpler transmission, based on the G50 unit in the previous 3.2 Carrera, that powered the rear wheels.

This configuration gave a more traditional 911 ‘feel’ to the car, yet the revised coil-sprung suspension ensured that the handling was secure and predictable, but with less of the under steer of the Carrera 4.

A useful side-effect of removing the four-wheel-drive was that the Carrera 2 was some 100kg lighter than its stablemate, thus making it a little more nimble and responsive.

The Carrera 2 was the first 911 to be offered with a fully automatic transmission (the Sportomatic of old was essentially a clutchless manual). The new Tiptronic transmission was, in effect, two systems in one. First, you had four-speed fully automatic changes when the floor-mounted shifter was in the left-hand position. Move the lever to the right, though, and you could change ratios manually simply by tipping (hence the name Tiptronic) back or forwards. It certainly extended the 911’s appeal into new markets.

Like the Carrera 4, the 964 Carrera 2 debuted with flat-faced Design90 wheels, but in 1992 new Cup wheels were fitted. At the same time, the ‘elephant ear’ door mirrors were replaced with more modern-looking ‘teardrop’ items.

The Carrera 2 may offer a purer driving experience than a Carrera 4 on the track, but for road use there’s little to choose between them. They’re both affordable and enjoyable 911s with a good mix of modern and classic appeal.

Targa The 964 Carrera 4 was available in Targa form with a lift-out roof panel.

Cabriolet A fully convertible Carrera 2 was available with an electrically operated hood.

Turbo-Look Cabriolet A Cabriolet Carrera 2 was offered from 1992 with the wide body of the 911 Turbo, plus that car’s updated brakes and suspension.