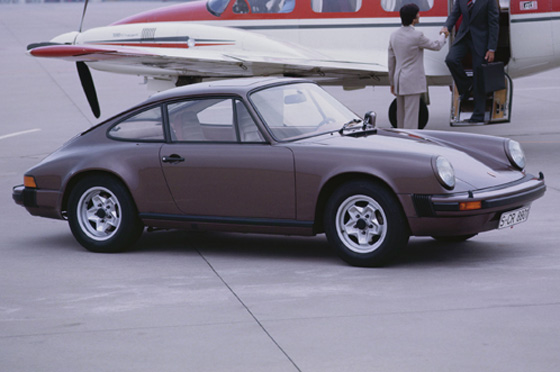 By 1976, non-US buyers had a new top of the range 911 to choose. The Carrera 3.0 was basically the same as the previous Carrera but fitted with a new 2994cc engine. This was essentially the same unit as fitted to the new 911 Turbo but, of course, without the turbocharger. Instead, the compression ratio was raised to 8.5:1 by the use of domed pistons. The engine boasted Nikasil-coated cylinder bores, an aluminium crankcase and Bosch K-Jetronic fuel injection. This is the engine that, with minor changes, would power the 911 right up until 1989.

Bizarrely, the larger engine produced 10bhp less power at a round 200bhp, but the torque came in lower down the rev range, making the car more drive-able. The new unit was more economical, too.

In other respects, the Carrera 3.0 had the same features as the I and J series 911 and 911S, including a fully galvanised bodyshell and large elephant ear door mirrors. In 1976, for the J series, the Carrera 3.0 was fitted as standard with a new automatic heating system (this was also found on the Turbo and an option on other models. A problem with the 911’s air-cooled engine was that it was hard to maintain a constant cabin temperature. As the engine temperature rose in traffic, so did the interior, which meant you were constantly tweaking the temperature levers between the seats.

The new system replaced the levers with a control knob that you turned to set the required cabin temperature, as measured by a sensor between the sun visors. A servo motor between the seats opened and closed the heat-exchanger valves as required. It wasn’t perfect, but certainly a move in the right direction, as buyers became less tolerant of the 911’s foibles.  In the USA, meanwhile, there was no Carrera 3.0 because the larger engine would not meet emissions standards. Instead, the previous 2.7-litre engine continued in the Carrera so the car had exactly the same 175bhp power as the 911S. Worse still, cars bound for California only produced 160bhp. The Carrera variant was withdrawn from the US market in 1976, leaving just the single 911S.

The Carrera 3.0 is undoubtedly a better car than the 2.7, even though the latter has the cache of sharing an engine with the RS 2.7 and the older revvy unit made the car more fun to drive.

The Carrera 3.0 engine can be easily identified by its five-blade cooling fan the 2.7 engine had an 11-blade fan.