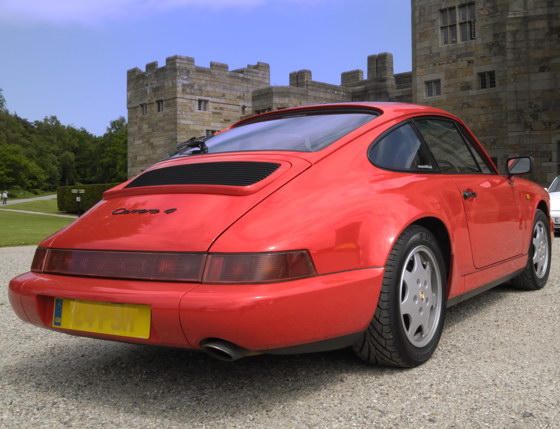 By the early 1980s the Porsche 911 had established itself as one of the classic sports cars of all time. Its distinctive shape was instantly recognisable, and revered by car enthusiasts the world over.

But there was no getting away from the fact that the 911 was getting long in the tooth. Competition from Japan, in particular, was having an effect on sales, especially to those who wanted a prestigious sports car, but who didn’t want to put up with the compromises offered by the 911.

Porsche knew that if it was to survive it simply had no alternative but to update the 911. This brought, in October 1988 for the 1989 model year, the radical 911 Carrera 4. This was known within Porsche itself as the 964, and this designation is still widely used by enthusiasts.

The Carrera 4 featured a four-wheel-drive transmission system based on that of the 953-model Paris Dakar Raid car of 1983. Not only did this new transmission go a long way toward eliminating the 911’s previously rather wayward handling, but it also proved to the buying public that the car was now bang up to date.

But there was much more to the new 911 than four-wheel-drive. Indeed, Porsche’s press office claimed that the 964 was no less than 87 per cent new compared to the previous Carrera 3.2.

The majority of the changes were mechanical. Out went the old torsion-bar suspension to be replaced by conventional coil springs. The brakes were uprated and, for the first time in a 911, ABS was standard.

The engine was based loosely on the earlier 3.2-litre unit, but was considerably modified. The capacity, was increased to 3.6 litres by altering the bore and stroke and fitting new pistons. Output rose from 231bhp to 250bhp at 6100rpm, while the torque increased from 284Nm to 310Nm at 4800rpm.

Twin spark plugs per cylinder were ignited by dual distributors, to improve the combustion efficiency and thus allow the ignition timing to be retarded, while at the same time allowing the use of 95-octane fuel with an increased compression ratio of 11.3:1. A new Bosch Motronic engine-management system controlled both the ignition and fuel-injection systems.

New cylinder heads featured ceramic liners for the exhaust ports. These were claimed to reduce the head temperature by some 40 degrees Celsius, thus eliminating the need for sodium-filled exhaust valves, which had been a feature of the 911 engine since the beginning.

The engine was mated to an all-new G64 gearbox with a centre differential for the mechanical four-wheel-drive transmission.

The four-wheel-drive required significant changes to the bodyshell. The luggage compartment was now deeper at the front than before, but the rear was occupied by both the fuel tank (which had to be raised to make room for the transmission) and the turrets for the coil springs.

The 964 kept most of the previous car’s body panels, but was updated with integrated deformable bumpers. In addition the front and rear screens were more flush-fitting and this, combined with a revised floorpan and a rear undertray, reduced the drag coefficient to just 0.32.

Another aerodynamic change was the rear spoiler. The whaletail of previous 911s had fallen out of favour with buyers, who now preferred cleaner, more subtle lines. But the rear of the car still needed downforce at high speed, so Porsche developed a retractable spoiler. This lifted when the car reached 50mph, and then dropped down again at a little over walking pace. The raised tail also improved engine cooling.

Inside, the changes were more subtle. A larger centre tunnel was required to accommodate the four-wheel-drive transmission, and this also reduced the length of the gearlever. The dashboard was basically the same as before, but came with new instruments with built-in warning lights.

There was an electronically controlled heating system with conventional dashboard-mounted controls that were easier to use and more effective than the old system between the seats.

The first 964 Carrera 4s had flat-faced Design90 wheels, but in 1992 new Cup wheels were fitted. At the same time, the ‘elephant ear’ door mirrors were replaced with more shapely ‘teardrop’ items.

The 964 Carrera 4 was undoubtedly a great step forward for the 911 but some early cars suffered from oil leaks and other reliability issues. These were quickly addressed by Porsche but the 964 never really recovered its reputation and, once the 993 came along, prices dropped and the 964 became somewhat forgotten. Yet buy a good one and you’ll have a modern 911 with classic looks for a very reasonable price.

Get into a 964 and you’ll immediately feel at home with that classic 911 dash. You know a row of five dials in front of, and partly obscured by, the steering wheel, and switchgear haphazardly scattered around the cockpit. But compared with earlier 911s even the internally similar 3.2 Carrera which was sold until 1988 the 964 cockpit feels and looks so much more modern, even if it’s basically the same.

Proper dash-mounted, electronic heater controls help, as does an array of warning lights and a stumpy gearstick. Other than that, though, it’s all pretty much classic 911. However, it nonetheless seems, for some indeterminable reason, less antiquated, and certainly a place you can be comfortable in for long journeys.

Start the engine and there’s no doubt whatsoever that’s an air-cooled flat-six behind your back. The sound, wonderful as it might be, is comfortably muted by sound-deadening so, once again, this is a car you can live with on long journeys.

That feeling is confirmed when you start moving. You see, the 964 was the first 911 to have coil springs, rather than torsion bars. That means you get a better, more forgiving ride, and more conventional handling.

If you’re used to earlier 911s, than the 964 undoubtedly feels a heavier car. Which it is that transmission system, plus all the electronics and sound-deadening aren’t light. But what the 964 lacks in agility it makes up for in pure drive ability. You can push the car ever harder into bends, and it always feels secure and well-planted, with less of the floating front-end feeling of earlier 911s (and, indeed, of the contemporary Carrera 2). Accelerate hard through a bend and you can feel all four wheels putting the power down and, significantly, the front ones pulling the car around the corner

Yes, there is under steer, but so what? At road speeds, even if you’re pushing hard, it’s never off-putting and, besides, under steer is always a safer state on public roads than over steer. At least you can feel what the car is doing and remain in control. At slow speeds that power steering a novelty for a 911, but standard on most other prestige cars in 1989 makes parking a doddle.

You are always very much in control of the Carrera 4. It’s a forgiving machine thanks again to that under steer and you’re unlikely to get into trouble with it. Go out in the wet or ice conditions that get owners of older 911s rushing for the safety of the garage and you appreciate the reassurance that the four-wheel-drive offers, too. The tail-happy behaviour of earlier 911s may be fun once you’ve mastered it, but the tamed 964 is a car that anyone can get into and drive with confidence.

Targa The 964 Carrera 4 was offered in Targa form with a lift-out roof panel from 1990.

Cabriolet A fully convertible Carrera 4 appeared in 1990 with an electrically operated hood.

Celebration To mark 30 years of 911 production, Porsche built 911 examples of the 911 Celebration in 1993. This was a Carrera 4 with the wide wings of the Turbo, full leather interior and 30 Jahre 911 badging.

Some of the last 964-model 911s featured the updated dash as fitted to the later 993-model cars, to accommodate a passenger airbag.