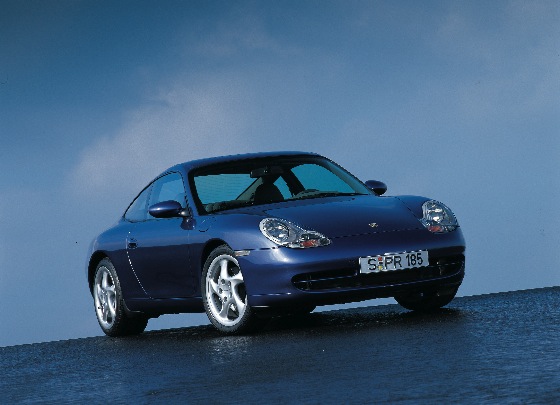 Hot on the heels of the all-new 996-model 911 Carrera came the all-wheel-drive Carrera 4 version. By this time, a 4 was an essential part of the 911 line-up and the new car was eagerly awaited.

The four-wheel-drive system was what Porsche called intelligent. It responded to the driving conditions and distributed power to the front and rear wheels as required, via a viscous coupling. During normal driving, only 5 percent of the power went to the front wheels, thus ensuring the car felt like a true rear-drive 911. However, if the system detected that a wheel was slipping then up to 40 percent of power would be transferred to the front, to give excellent traction and handling.

The Carrera 4 came as standard with PSM (Porsche Stability Management which was optional on the standard Carrera). This electronic system combined traction control, anti-slip control (ASR) and Automatic Braking Differential (ABD) to enhance the car’s handling. Sensors measured direction, speed, yaw and lateral acceleration, and a computer used this information to determine the direction of travel. If the car over- or understeered, the system would apply the brakes to an individual wheel to get the car back on line. And if that wasn’t sufficient, the engine speed would be altered to stabilise the car, as could the percentage of power transferred to the front wheels. PSM could be turned off if it wasn’t required; for instance, for track use.

What’s more, the Carrera 4 was the first Porsche to feature E-Gas; effectively a drive-by-wire electronic throttle control instead of a traditional cable linkage between the accelerator pedal and the engine. It really was the most technologically advanced 911 to date.

Although the Carrera 4 was more expensive than the Carrera when new, as the cars came onto the secondhand market, the price differential reduced, making a Carrera 4 excellent value as a used car.

Cabriolet The Carrera 4 was available with a fully convertible body-style, using an electrically folding hood.