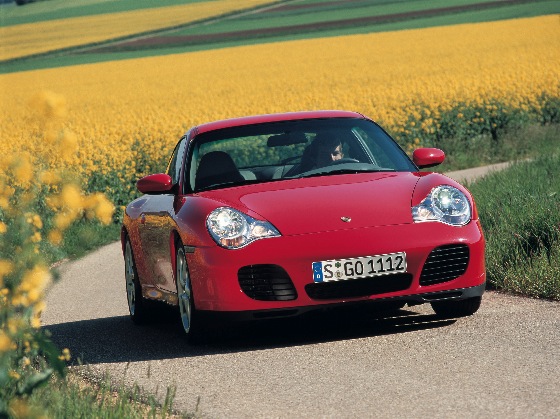 After the success of the 993-model Carrera 4S, it was no surprise when Porsche unveiled a successor, the 996-version with the same name.

The new Carrera 4S was, like its predecessor, essentially the wide Turbo bodyshell with the drivetrain from the standard Carrera 4. There were, however, some visual differences. The Turbo’s front and rear bumpers, with their intakes, remained, but the wide rear wings lacked any air intakes (they weren’t required for the normally aspirated engine). While instead of the Turbo’s part-fixed rear spoiler, the 4S had the standard car’s fully retractable item.

The main distinguishing feature of the Carrera 4S was its full-width rear reflector, which marked the welcome return of a popular 911 trademark. This feature alone won the model lots of fans and helped make it one of the best-looking 996 variants.

However, there was more to the Carrera 4S than just good looks. The uprated suspension was based on that of the Turbo, so the car was 10mm lower than the standard Carrera. The brakes, too, came straight from the 911 Turbo and gave phenomenal stopping performance. The wheels were also the 18-inch Turbo items.

Throw in four-wheel-drive, PSM (Porsche Stability Management) and a high interior specification and the Carrera 4S, despite costing more than the standard Carrera 4, began to make a lot of sense, that’s gone on to be one of the most sought-after of the 996 variants.

Cabriolet An open-top version of the Carrera 4S debuted in 2004 and combined the wide-body with a powered soft-top.

The Carrera 4S’s distinctive full-width rear reflector was based on a feature that first appeared on the 911 in 1974.