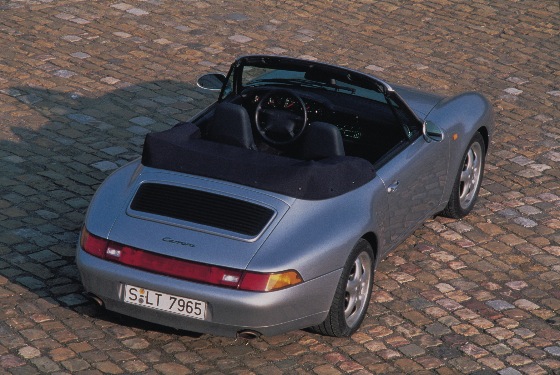 The 964-model 911, which debuted in 1989, certainly progressed the 911 but there were those within Porsche (and outside) who weren’t happy with it. In particular, the handling (in particular of the Carrera 4) was criticised, as was the road noise transmitted through the rear suspension. And, besides, the 911’s styling (which dated back to 1963, remember) was, said some, looking rather tired with its Beetle-like wings and headlamps. 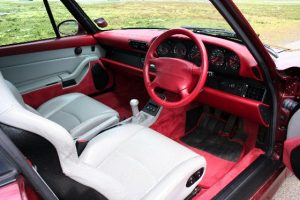 Porsche responded with the criticism with the 911 Carrera. Code-named 993, this was claimed to be no less than 80 percent new. British designer Tony Hatter took the 911 bodyshell and gave it a bold new identity, but without losing the classic profile the new car was still instantly recognisable for what it was.

At the front, the wings became much lower and shapelier and had tipped back headlamps no longer could you see the front wings from the driver’s seat. The front bumper no longer looked like an afterthought and the result was a more integrated face but was criticised by some for looking too narrow.

Such comments certainly couldn’t be addressed to the rear of the new 911. The wings curved out in a sensuous manner and blended into a more integral bumper and restyled lights and central reflector  the latter a 911 trademark that just wouldn’t die. The retractable rear spoiler was similar to that of the 964, but was more flush-fitting when lowered. There were few cars that looked as good from behind as the 993.

Other visual changes included neater and flusher window frames including a glued-in windscreen new, more elegant exterior door handles and at last redesigned windscreen wipers with longer blades and a revised sweep to cover a claimed 80 percent of the screen.

The overall effect was of a thoroughly modern, coherent design that dragged the 911 firmly into the 1990s, while not losing the car’s essential character.

The changes, however, were much more than skin-deep. The engine was obviously based on that of the 964 but, said Porsche, every part was new. Capacity remained at 3600cc but the engine featured a stronger, heavier crankshaft combined with lighter pistons and connecting rods to improve the balance and allow the engine to rev easier.

Servicing time and costs suddenly reduced with the adoption of self-adjusting hydraulic tappets, in place of the previous adjustment screws. The new system used tiny cylindrical adjusters fed with oil from the rocker arm.

The induction system featured a hot-film sensor for measuring airflow, which was less restrictive than the previous flap arrangement. This was linked to a revised Bosch Motronic engine management system. At the other end of the engine, a brand-new exhaust system was fitted, which was quieter and boasted stylish twin tailpipes.

All this gave a more powerful but, at the same time, more economical engine, with peak power up to 272bhp a useful 22bhp up on the 964. This was fed through to the rear wheels via a new gearbox, which was based on the previous G50 but now with six forward speeds and an improved shift action. The optional four-speed Tiptronic transmission was carried over from the 964 with detail revisions. However, in 1994, the system was updated to Tiptronic S which featured fingertip controls on the steering wheel for manual changes.

What didn’t come from the 964, though, was the rear suspension. Aware of criticism of the 964’s handling and road noise, Porsche’s engineers came up with an all-new design. Out went the semi-trailing arm set-up and in came a multi-link system with parallel wishbones attached to a sturdy aluminium subframe. This gave some passive rear-wheel steering that served to counteract the dreaded lift-off oversteer and gave an overall improvement to handling. The subframe was attached to the body via rubber mounts which reduced the amount of road noise reaching the cockpit. At the front, the previous MacPherson strut arrangement was retained with revised geometry.

Brakes, too, were uprated with thicker discs all round, and larger diameter 304mm front ones. These were acted on by bigger four-caliper pistons controlled by a new, faster-acting ABS system.

Inside, the familiar 911 dashboard remained, albeit with a revised lower dash section containing the glovebox the section where the glovebox used to be was thus freed up for a passenger airbag (not that this arrangement did appear on some of the last 964 models). New, more elegant door pockets and handles appeared, while the front and rear seats were redesigned.

In 1995, for the 1996 model year, the 993 engine was uprated to 285bhp. This was achieved by the adoption of a new induction technology called Varioram. This altered the length of the inlet pipe as engine revs increased, thus ensuring volumetric efficiency. At the same time the inlet and exhaust valves were enlarged.

The 993 series on 911s has proved to be reliable and great fun to drive and own. It was the last of the air-cooled cars and this fact, combined with the 993’s curvaceous lines, has established it as a favourite with many Porsche enthusiasts and, as such, prices have remained relatively high compared with those for the preceding 964 and succeeding 996.

Targa An all new interpretation of the Targa body style appeared for 1996. This had had a glass roof panel which, at the touch of a button, slid back under the rear window. It was a much neater solution than the previous Targa in that it retained the classic 911 side profile and the roof didn’t take up valuable space in the luggage compartment. Also, when the roof was closed, the glass panel gave the cockpit an spacious feel. However, when it was opened, the two sheets of glass together restricted rear visibility.

Cabriolet The 993 was available in full convertible Cabriolet form from 1994, using an improved and fully electric hood. A mesh wind deflector could be fitted behind the front seats to reduce buffeting at high speed, although it meant the rear seats couldn’t be used.

Porsche claimed that only the roof panel of the 993 was carried over unchanged from the previous model.