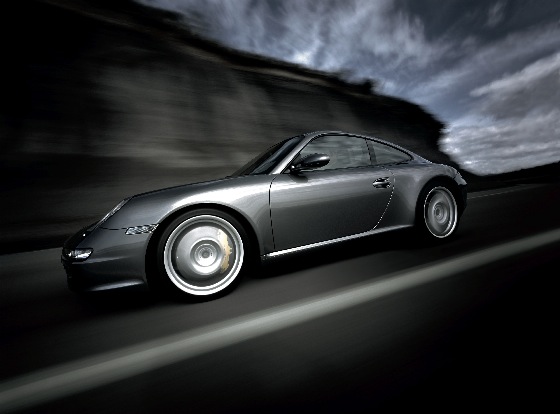 Right from its introduction, the 996-model 911 was criticised, mainly by die-hard Porsche enthusiasts. It was, they said, bland-looking and lacked the essential 911 character. In reality, the 996 was a great 911 and it’s hard to define what that missing character was, but Porsche’s designers obviously took the comments seriously when they were planning a successor to the best-selling 996 range.

That new car was the 997-model 911 Carrera, launched in 2004. For many, the 993 was the best-looking 911 ever, so Porsche very obviously drew on that car’s lines for the 997. The wings became more shapely and the car less slab-sided, while at the front the large, oval-shaped projector headlamps had an unashamed 993 influence. The indicators were housed in the front bumper; again, as per 993. The door mirrors and handles were new, too. However, there was more to the 997 than just this, Porsche claimed it to be 80 percent new compared to the out-going model.

While the exterior changes were an evolution of the 996’s lines, the interior was all-new, albeit with a nod to the 993 (and earlier) dash layouts. The dash was more angular and less plasticy than that of the 996, and featured a large screen in the console for PCM (Porsche Communication Management) even if the car wasn’t fitted with the optional telephone or sat-nav. It was all very well put together and gave the 911 an altogether more luxurious feel.

The 997 Carrera had essentially the same 3.6-litre engine as the 996, but it was fine-tuned to give an increased power output of 325bhp at 6800rpm (a modest 5bhp increase), while a new exhaust system brought back at least some of that traditional 911 soundtrack. The power went to the rear wheels via a revised six-speed gearbox, while an automatic Tiptronic S was optional.

The suspension was also based on that of the 996, but with a wider track and revised geometry to give even better handling and ride. However, an exciting new option was PASM (Porsche Active Suspension Management). This gave the driver a choice of two suspension settings, simply by pressing a button on the centre console. Normal mode was for standard on-road driving and offered a comfortable ride quality; but when the system detected that the car was being driven and cornered hard, the damper settings automatically firmed up to compensate. By contrast, the Sports mode gave a harder ride for optimum handling on twisty roads or the racetrack. PASM effectively gave you two cars in one, a comfortable everyday tourer and a honed track machine.

Another innovation option was Sports Chrono Package Plus. This gave another button on the centre console which, when activated, changed the engine management maps to offer more immediate throttle response and a higher rev limit. In effect, it was like having the car temporarily rechipped for extra fun. On Tiptronic-equipped cars, the transmission was remapped to give a livelier drive. As the name suggests, this package also included a dashtop-mounted chronograph for track timing. Measurements made with this device could be saved and retrieved on the PCM screen.

The new 997-model 911 Carrera gave the perfect combination of 911 traditions with 21st century technology. However, the majority of buyers opted for the more powerful Carrera S version, and it is likely that the basic Carrera will be the less desirable of the two in years to come. 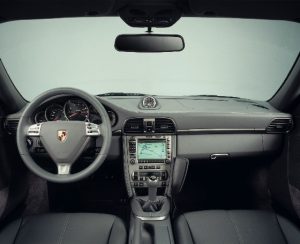 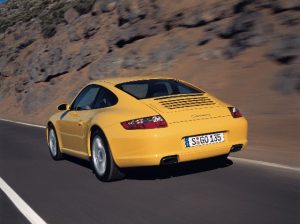 Cabriolet The 997-model 911 was offered with a fully electric soft-top to give open-air motoring. The roof opened or closed in just 20 seconds and could be controlled by the car’s keyfob.

The 997 had an aluminium bonnet, which Porsche said saved 3kg over the previous steel item.