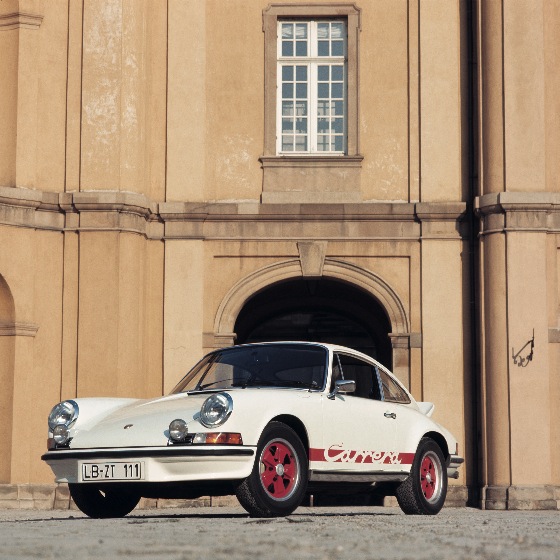 Today, the Carrera 2.7 RS is, quite simply, the most sought-after production 911 ever. It’s reached almost legendary status among Porsche aficionados and prices are sky-high.

Yet this oh-so-perfect sports car almost never happened. The RS was developed as a homologation special to allow Porsche to compete in GT racing – the company was required to build 500 road-going cars in order to qualify. However, the marketing department doubted whether they could persuade people to pay a premium for a 911 with few creature comforts. Thankfully, they were overruled.

The car was developed from the F series 911S but was significantly modified to improve performance. The 2.4S engine was increased in capacity to 2681cc by using larger 90mm Nikasil-coated aluminium cylinders. This nickel-silicon carbide treatment gave the bores a hard, low friction surface and went on to become standard on later 911 engines. In other respects the engine was the same as in the 911S. The larger capacity pushed power to 210bhp at 6300rpm and torque to 255Nm at 5100rpm – a useful increase over the 911S’s 190bhp.

However, the main performance gains were made by putting the car on a weight-saving programme. The roof, wings and bonnet were made of thinner (and so lighter) steel, while the windscreen and rear quarter windows used thinner glass.

The rear arches were flared by 50mm each to accommodate wider 7-inch Fuchs alloys, and there was the option (which most buyers took) of a distinctive ’ducktail’ spoiler to give added downforce.

To distinguish the Carrera RS from ‘lesser’ 911s, there was the option of large and distinctive ‘Carrera’ side stripes that ran from the front to rear arches. Offered in red, blue, black or green, you have the Fuchs wheel centres colour-coded to match. Combined with distinctive Grand Prix White paintwork this gave what is now recognised as the RS look.

The Carrera RS was produced in two road-going versions. The RS Sport (which carried the option code M471 and is often called Lightweight) had a very basic specification to keep the weight down to just 975kg. The interior had simple rubber mats, manual window winders, reduced soundproofing, and Recaro sports seats, no rear seats, no clock and no passenger sun-visor. The front bumpers and engine-compartment lid were made from lightweight glassfibre.

However, not everyone wanted to rough it, which is why Porsche also made the more popular RS Touring (M472) model. This had the same lightweight body as the Sport, but with the steel bumpers and interior specification of the 911S. In other words, it had rear seats, full carpets, electric windows and full soundproofing. These additions added 100kg to the car’s weight.

When the RS was unveiled in September 1972, Porsche’s marketing people were proved wrong. So wrong, in fact, that all 500 cars were sold before the RS was officially announced. Because of this, production was continued until July 1973, by which time 1580 cars were built. Of these, the majority were Tourings and 200 were Sports. There were also 17 in the very basic RSH homologation specification, and 55 were race-ready RSRs. The latter boasted a rollcage, even wider rear arches and a 2.8-litre engine that produced 300bhp. Just 117 cars had right-hand-drive.

Because of the unexpected increase in production, later RSs used standard 911 body panels and glass, for the simple reason Porsche had run out of the lightweight items.

After production finished, Porsche went on to built an even rarer RS. Just 109 examples of the 230bhp 3.0-litre RS were made, using standard bodyshells.

Today the Carrera RS is the Holy Grail of Porsches, and good genuine ones are extremely sought-after, leading to a healthy business in replicas, based on contemporary 911s.

If you know about Porsches, you know that there’s something special about a Carrera 2.7 RS. If you didn’t, then you’d wonder what the fuss was about. Even in Touring guise (as most are) the interior seems bland and uninviting with its utilitarian black finish and rather too soft seats. Indeed, apart from a slightly smaller steering wheel, you could easily be in a contemporary 911S.

Start the engine (remembering to use the cold-start lever between the seats) and it settles to a slightly rough but meaningful idle. Start to rev it and you get that true spine-tingling 911 wail – it sounds simply wonderful.

The extra power and torque of the 2.7 engine is immediately apparent – the car feels quite different to the contemporary 911S. Having 210bhp in such a light machine is a delight. The car responds immediately to the throttle, in a way that’s been lost with later, heavier 911s.

The steering, too, feels light and direct. It’s non-assisted, so you get incredible feedback through the wheel. Turn the wheel and the car reacts immediately. The handling is better than you expect – very good, in fact – but you’re always aware that the rear-engine could snap at you if you don’t commit yourself through the bends. Lift off the throttle partway through and you could find yourself facing the wrong way – or worse.

But, hey, that’s part the appeal of the RS. It’s a car you have to respect and if you do, it’ll reward you with one of the best driving experiences around.

Faults? It’s hard to think of any when you’re intoxicated by the whole driving experience. The ride is firm, but not overly so on those old high-profile tyres. The brakes are somewhat lifeless until you hit the pedal hard, while the 915 gearbox takes some getting used to. It’s a ’box that you have to treat gently, easing the lever from gear to gear, rather than expecting it to snick into place. Once you’re used to it, though, the gearchange adds to the whole RS experience.

A word of warning, though’ drive an RS once and you’ll never forget it. At the back of your mind you’ll always yearn after this oh-so-great Porsche.