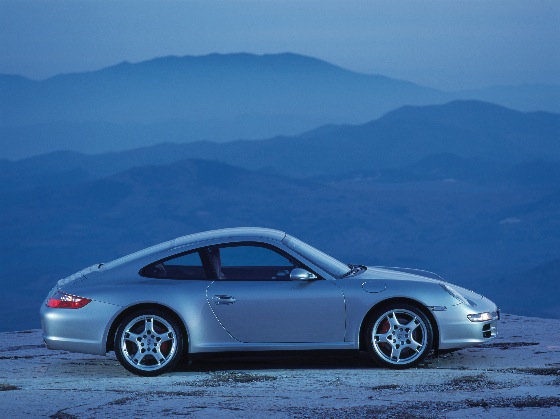 With the introduction of the 997-model 911, Porsche took the opportunity to change the model range. Now there was the standard Carrera, with its 3.6-litre engine, and alongside it sat the Carrera S with a more powerful 3.8-litre powerplant. This was the first time since 1977 that the normally aspirated 911 was offered with a choice of engine size.

The new engine was based on the existing 3.6-litre unit but the cylinder bores were increased in diameter from 96mm to 99mm. There were also changes to the combustion chamber, engine management system, while a new four-tailpipe exhaust system gave the Carrera S a distinctive and more muscular sound than its less powerful stablemate. As with the Carrera, the power was fed to the rear wheels only via a six-speed manual gearbox or optional Tiptronic Plus automatic transmission.

Porsche Active Suspension Management (PASM), which was optional on the Carrera, was standard equipment on the Carrera S. This allowed the driver to switch between a softer damper setting for everyday use that automatically firmed up during spirited cornering, and a Sports setting for serious driving on road or track. No longer did buyers have to choose between standard and Sports suspension when ordering the car, now they had the best of both worlds at the touch of a button.

The car could be further modified if the optional Sports Chrono Package Plus was fitted. Pressing a button on the centre console effectively rechipped the engine to give a more responsive throttle, higher rev limit and, in the case of Tiptronic transmissions, more sporty changes. A stopwatch on the dashtop was handy for timing track laps.

Inside, the Carrera S could be distinguished by its aluminium-coloured instruments. In other ways, it had the same interior as the 997-model Carrera.

The Carrera S was a very complete package that made it hard for buyers not to opt for this car over the lesser Carrera. It really is a very hard 911 to fault.

Cabriolet Like the Carrera, the Carrera was available in soft-top form with a fully electrically operated hood.

The S badge first appeared on a production 911 back in 1968. Then, as with the 997, the suffix signified a more powerful than standard model.