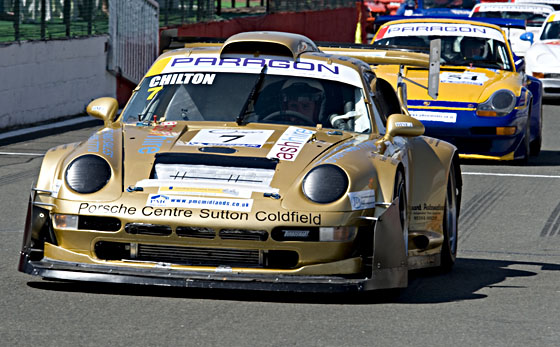 By the 1990s, the 911 Turbo offered superb performance and handling in a well-specced package. It was, in short, a luxurious supercar that could waft you across continents in speed, comfort and style. However, at 1575kg it was no lightweight and not an ideal racetrack machine. And then Porsche had the bright idea of stripping out almost 500kg from the Turbo and creating a racecar to compete in the GT2 class of the Global Endurance Series.The 911 GT2 weighed slightly more in road-going trim, at 1290kg, but was still substantially lighter than the Turbo. The weight was removed in typical Porsche RS fashion â out went all the unnecessary luxuries. Electric windows and seats, air-conditioning, much of the sound insulation, sunroof, and interior door furniture. In came thinner glass, aluminium bonnet and doors.

However, the biggest change from the Turbo was the decision to make the GT2 rear-wheel-drive only. Ditching the four-wheel-drive not only saved a fair amount of weight, it also created a purer track car.

Those rear wheels were driven by essentially the same twin-turbo engine from the Turbo, albeit tweaked to produce 430bhp, compared with the standard carâs 408bhp.

To get that power down on the road and to give unparalleled grip, the GT2 was fitted with massive 18-inch Speedline wheels, which were 9-inches wide at the front and no less than 11-inches at the back. These sat within huge plastic wheelarch extensions with visible bolts holding them to the wings. These left you in no doubt that the GT2 had a race-bred pedigree.

Neither did the front and rear spoilers, which were developed with the aid of a wind-tunnel. At the front, a deep lip spoiler had distinctive turned up ends, which not only looked amazing, they also increased downforce. The rear spoiler was even more stunning, though, with its huge adjustable wing and side inlets that forced air to the engine.

Not only did the GT2 look like no other 911, it went like one too. With a claimed 0-62mph time of 4.4 seconds (reducing to 3.1 in the case of the full-race version) and a top speed of 189mph it was fast, by anyone’s standards. And with the power going through the rear wheels only, it could be a brute of a car to drive and certainly not for the faint-hearted.

However, you could rest assured that it was fitted with the same excellent ventilated brake discs and big red four-piston calipers as the Turbo, while the suspension was lowered and updated with stiffer springs and dampers to give a firm but (due in part to the 993’s multilink suspension) compliant ride.

It is thought that Porsche only built around 80 GT2s, which makes them very rare and very sought-after. If you’re looking for a track car or a wild road-going machine, then a GT2 could be for you. If, however, you like your comforts, then opt for a standard (and less expensive) 911 Turbo.