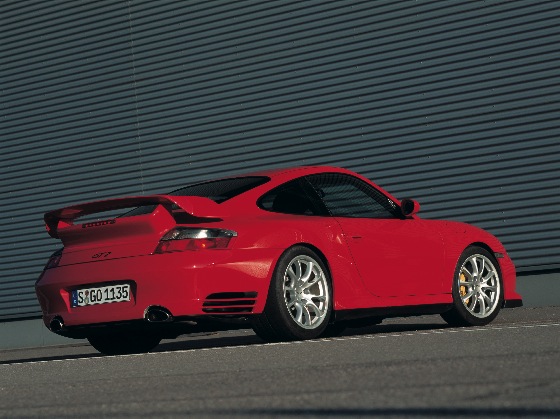 The 996-model 911 Turbo was, undoubtedly an incredible machine but there were some customers who wanted a rawer, more extreme version, which Porsche offered in the form of the GT2.

This car used basically the same engine as the Turbo, but with larger KKK K24 turbochargers which, together with different intercoolers, exhaust and engine management system, upped maximum power to 460bhp at 5700rpm. A crucial difference to the Turbo, though, was that all this power went through the rear wheels only and there was no PSM (Porsche Stability Management) to help control it.

The suspension was lowered and uprated to give a rock-solid ride, and was fully adjustable for racing use. For the first time on a production Porsche, ceramic brake discs (which were an option on the Turbo) were standard fitment. These were made from carbon-reinforced silicon carbide and gripped by bright-yellow six-piston calipers. Porsche claimed that the discs would last for over 150,000 miles and dissipated heat better than conventional cast-iron items.

The bodyshell was that of the 911 Turbo, with the same wide rear wings with air intakes in each side. However, at the front the three huge intakes were dissected by a horizontal bar, while an additional splitter increased downforce. At the back, downforce was further increased by a large, fixed spoiler.

Inside, you could opt for ClubSport spec, which gave a stripped-out cockpit with rollcage, full harnesses and fire extinguisher, not unlike the GT3 version. The standard specification was, again, similar to the GT3 Comfort with no rear seats and race-style front seats.

In 2004 the GT2’s engine was uprated to 483bhp, while the body’s aerodynamics were also improved.

At 1440kg, the road-going version was a full 100kg lighter than the 911 Turbo which, combined with the extra power, made this a very potent car, indeed. The top speed of the later version was 199mph, while 0-62mph took just 4.0 seconds. With rear-wheel-drive and no driver aids, the GT2 was not for the faint-hearted!

The GT2 cost considerably more than the 911 Turbo and GT3, which meant some people questioned its meaning. It’s not such a good road car as the Turbo, yet not as useable on the track as the normally aspirated GT3. That said, it’s a raw and mean machine that is always exciting to drive!

The GT2’s rear wheels were 18-inches in diameter no less than 12-inches wide with huge 315/30/ZR18 tyres. These were the widest wheels ever fitted to a production 911.