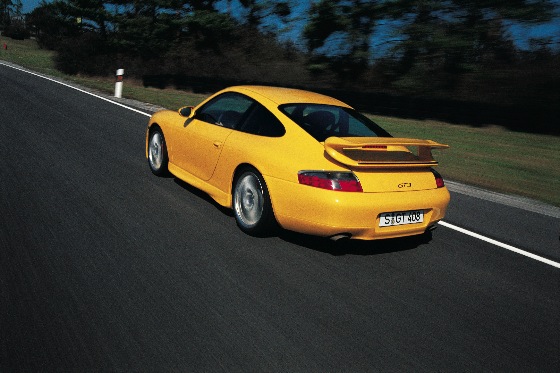 When the all-new 996-model 911 came along, it was obviously only a matter of time before Porsche produced a lightweight version, in the fashion of the earlier RS versions. Such a car appeared in 1999 and was called the 911 GT3, after the racing class it a homologation special for.

However, the GT3 was more than just a lightweight 911 it boasted a very different engine. The 3600cc unit combined the bottom end (crankcase and crankshaft, basically) of the GT1 racecar with the water-cooled and multi-valve heads from the 996 Carrera. VarioCam allowed the cam timing to alter through the rev range for increased performance and reduced emissions. Maximum was 360bhp at 6300rpm 60bhp up on the standard 911 and a convenient 100bhp per 1000cc. Torque peaked at 370Nm at 5100rpm.

To save weight and to give true racecar handling, Porsche made the GT3 rear-wheel-drive only, using a six-speed gearbox which was derived from the GT2 unit and, in ClubSport guise used a solid rod linkage to the gearlever instead of cables.

The car was lowered on its suspension by 30mm, compared to a standard 911, while dampers and springs were suitably updated to give a very firm ride. Suspension bushes were made harder, too, while the stiffer antiroll bars were adjustable front and rear. Brakes, too, were updated with large 330mm ventilated discs front and rear, acted on by four-piston calipers. The only electronic driver aid was ABS there was no PSM (Porsche Stability Management).

The lightweight theme continued with the bodyshell. Two versions of the car were available, the track-ready ClubSport and a more passenger-friendly version often known as the Comfort. Confusingly, the ClubSport specification was actually an option.

From the outside, both versions were similar, with a large rear spoiler (that could be manually adjusted for downforce). At the front was a deeper front spoiler with restyled air intakes (the GT3 had a central third radiator), while sill extensions gave the car a lower, meaner stance.

Inside, there were no rear seats, while the ClubSport was stripped right back to basics with manual window winders, no air-conditioning or radio, while full harnesses, fire extinguisher and a rollcage meant the car was track-ready.

The Comfort version was rather more like a conventional 911 inside, although air-conditioning, leather upholstery and a centre console were all extra, as were most other 911 options. You could, if required, specify a rollcage.

A total of 1890 GT3s were built in 1999 and 2000, and it is believed that 103 were right-hand-drive. It is, therefore, a rare machine. Thought by many enthusiasts to be superior to the later 2003 version, this original GT3 is very sought after.

GT3R A true racecar, the GT3R featured ultra-light carbonfibre body panels, a deeper front spoiler with huge air intakes, and a massive rear wing. Power was a heady 420bhp from the normally aspirated engine. A more powerful 450bhp version was called GT3 RS and shouldn’t be confused with the later road-going GT3 RS of 2004.

The limited production run of the 1999-2000 GT3 was partly because the factory facility was required for building the new 911 Turbo.