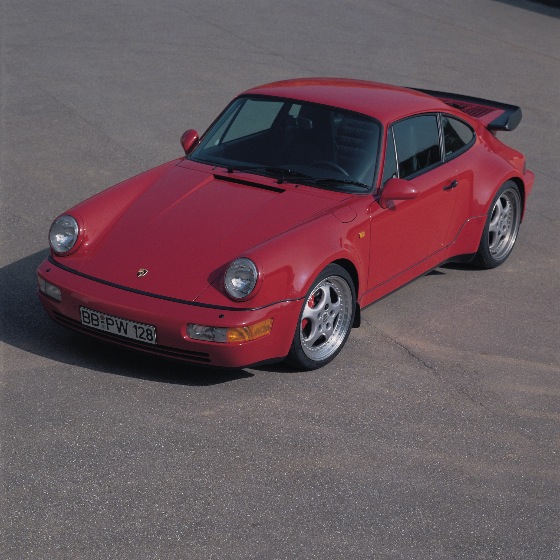 Up until 1993, the 964-model 911 Turbo used basically the same 3.3-litre engine that debuted in 1978, albeit with various updates to increase power. However, for the final year of production the Turbo was treated to a new 3.6-litre engine that was based on the more modern unit used in the normally aspirated Carrera 2 and 4.For the Turbo, the larger 3600cc engine was uprated with new cylinder heads that accommodated single spark plugs (the Carrera 2 and 4 used twin plugs per cylinder) and new camshafts. The single KKK turbocharger from the previous engine was carried over, essentially unchanged, but with new exhaust and wastegate designs. The engine management system was tweaked to suit the new arrangement.

This combined to give a maximum output of 360bhp and 520Nm of torque, while fuel consumption actually improved slightly. Driveability also benefited because the engine had a flatter torque curve and more low-down power, although that single turbocharger meant that turbo-lag was still apparent, if somewhat reduced.

The 911 Turbo 3.6 was fitted with the same 18-inch Speedline wheels that first appeared on the Turbo S, and it also had that carJust 80 911 Turbo S cars were built, all to special order. That makes it a very rare Porsche. Add in its stunning looks and performance, and you have a very sought-after machine, indeed. If you’re lucky enough to find one, though, bear in mind that it’s an extreme machine, with rock-hard suspension, minimal sound insulation and not much in the way of creature comforts. s large, red-finished brake calipers. Suspension was lowered by 20mm (except for US cars) and fitted with updated springs and a front strut-brace.

The larger engine transformed the 911 Turbo. Not only was it faster and more powerful than ever, it was also more driveable and useable as an everyday car. It was the last Turbo to be rear-wheel-drive and to use a large single turbocharger and for that reason it has a place in Porsche history as the last and best of the wild 911 Turbos, before the power was tamed with four-wheel-drive and smaller twin turbos.

911 Turbo 3.6S A small number (around 75) of the last 911 Turbos were produced as flatnoses with pop-up lights from the 968, air intakes in the rear wings. Engine power was increased to 385bhp. Note that a handful of Turbo 3.6S cars did not feature the flatnose front.

The 911 Turbo’s three-piece wheels have the words ‘Speedline for Porsche’ etched into their rims; this subtle detail is lost if the wheels have to be refinished.