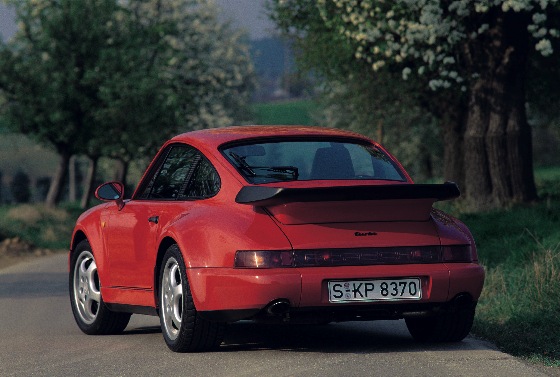 When the previous 911 Turbo went out of production in 1989 it was widely believed that was the end of the model. Indeed, Porsche went as far as to produce the 911 Turbo LE as a limited edition to commemorate the end of production. However, the following year a new 911 Turbo was announced, based on the new 964-model 911 Carrera 2.

This car used the revised 964 bodyshell with its integrated bumpers but was endowed with extended front and rear arches, to give the now familiar Turbo appearance. At the rear, the Carrera’s novel retractable spoiler was replaced by a fixed ‘teatray’ item which was a development of that fitted to the previous-generation 911 Turbo. The spoiler reinforced the Turbo appearance and also accommodated the intercooler.

The engine was essentially the 3.3-litre unit from the previous model but was updated with new, more efficient, inlet and exhaust systems, the latter with dual outlets. In addition, the Bosch Motronic engine management system was revised and the intercooler was enlarged. The upshot of all this was an increase in power from 300bhp to 320bhp, with torque up to 450Nm at 4500rpm.

The power went through the same G50 gearbox that appeared on the last of the previous Turbos, but with revised ratios and a better shift action. Although the new Turbo was a contemporary of the Carrera 4, Porsche chose to make it rear-wheel-drive only which, if nothing else, ensured the car was fun to drive!

To ensure the Turbo stopped as well as it went, it was equipped with the ABS system from the Carrera 2, but the discs were larger at 322mm front and 299mm rear. Suspension, too, was based on that of the Carrera, but uprated with stiffer springs and dampers.

The interior was that of the Carrera, too, but air-conditioning and full-electric seats were standard, while almost every part of the cockpit could, if you wished, be leather-trimmed at extra cost.

However, the big visual news with the 911 Turbo was the adoption of an all-new wheel. The 17-inch five-spoke alloys are known as Cup Designs, or just plain Cup, and went onto become standard fitment across the range, and set the style for Porsche wheels for years to come. In the same way, the Turbo debuted the new-shape ‘teardrop’ door mirrors would go onto be used on all 911s.

The first 964-model 911 Turbo was a great car but has become somewhat overshadowed by the outrageous 3.6-litre version that followed. However, that’s good news for buyers because prices are realistic and these cars offer an affordable way to enjoy relatively modern Turbo motoring.

Some people refer to the 964-model 911 Turbo as the ‘965’. This is incorrect  this type number was applied to a prototype high-tech 911 Turbo successor that shared much with the 959 super car, and could have finally have been badged ‘969’.