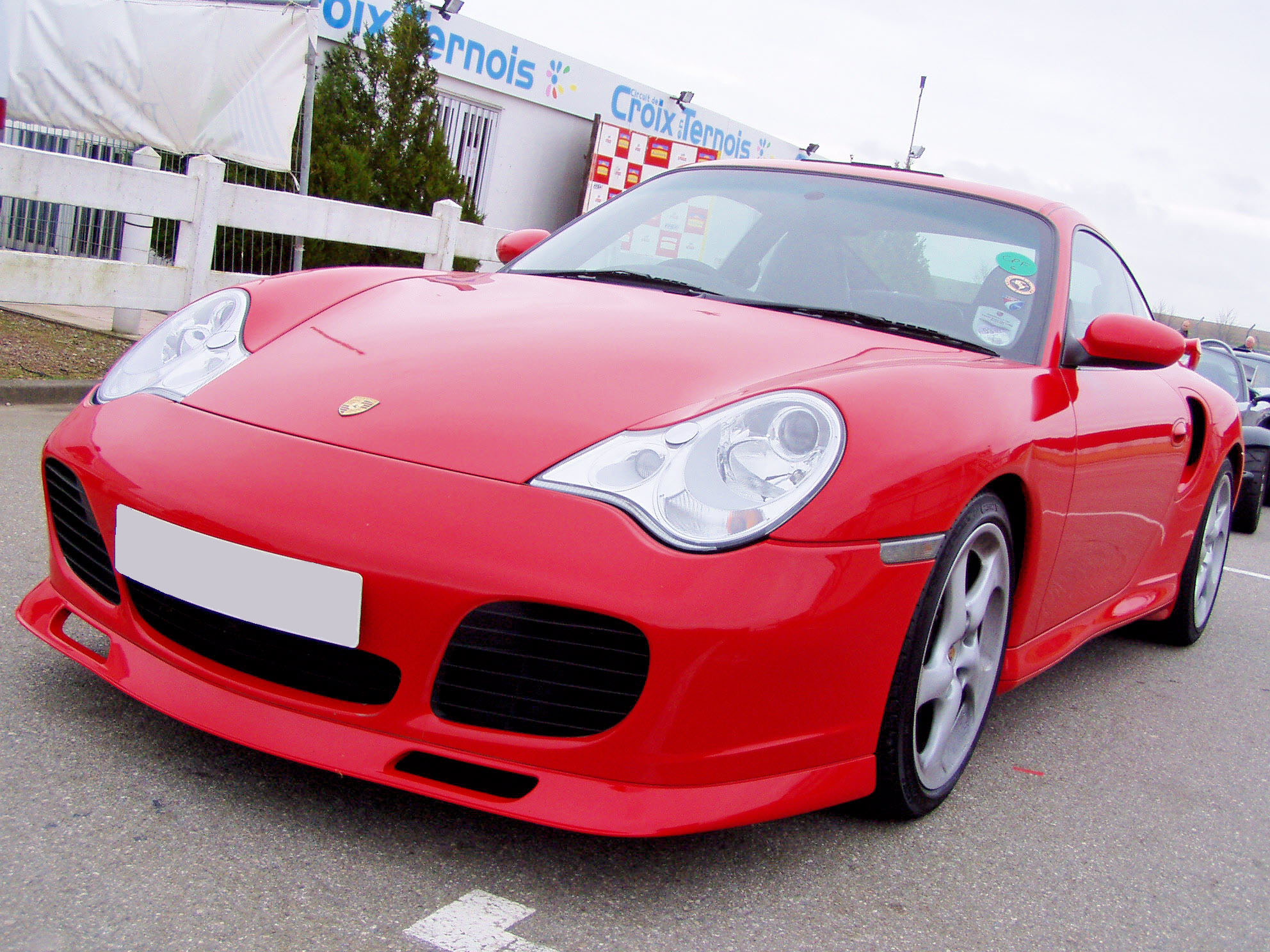 After the stunning 993-model Turbo, Porsche had a tough job to come up with something better. But it did with the 996 version, which was unveiled in September 1999 for the 2000 model year.

There was no doubt that the new 911 Turbo looked the part. The 996 Carrera had been criticised for looking bland, but you couldn’t say that about the blown version. The rear arches were widened to accommodate bigger wheels and had huge forward-facing intakes that fed air to intercoolers behind them.

Three more equally larger intakes punctured the deep front spoiler, allowing air to reach the radiators (which had been enlarged by 50 percent). The appearance was dramatic.

Also at the front were restyled headlamps that went away from the fried egg look of the Carreras (although the same lights would soon appear across the range). Out back, meanwhile was a modern take on the ducktail spoiler of old, this time with an extending section that rose when the car was travelling at high speed.

A set of 18-inch wheels (a full 11 inches wide at the back) completed the look and there was no way the 911 Turbo could be called bland, it was an aggressive reinterpretation of the supercar for the 21st century. 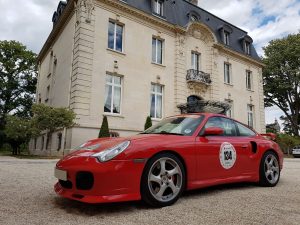 Power, too, was far from dull, with the 3600cc engine producing a heady 420bhp while amazingly, the maximum torque of 560Nm was available from 2700 to 4600rpm. The unit was derived from the normally aspired 996 and fitted with twin KKK K17 turbochargers which, as was the case with the 993, were dedicated to each cylinder bank. A novel feature of the engine was VarioCam Plus a development of the variable cam timing first seen on the GT3. This new system not only varied cam timing but also valve lift, which meant that the engine could run more efficiently and with reduced emissions. Indeed, Porsche claimed that the new car was 18 percent more economical than its predecessor.

The power went through the same four-wheel-drive transmission as the Carrera 4, with PSM (Porsche Stability Management) helping to ensure faultless traction and handling. Buyers had a choice of a six-speed manual transmission or, for the first time, a five-speed Tiptronic that gave fully automatic shifts, or clutchless manual ones using steering wheel controls.

Brakes were uprated to cope with the power and four-piston calipers acted on massive ventilated discs. A revolutionary option were ceramic brake discs in place of the more usual cast-iron ones. These were made from carbon-reinforced silicon carbide, even larger than the standard items, and gripped by six-piston calipers. The latter were painted bright yellow to differentiate them from the standard red items. Porsche claimed that ceramic discs were lighter, dissipated heat better and would last much longer than metal ones, more than 150,000 miles.

The Turbo’s suspension was lowered and uprated with stiffer springs and dampers, to a similar specification to the Sport option for the Carrera, while the rear control arms were from the GT3.

Inside, the 911 was finished to a high specification, with full leather upholstery, electric memory seats, climate control, multi-speaker hi-fi, plus numerous options. A new feature that would later find its way to all 911s were light-emitting diodes (LEDs) that subtly illuminated the centre console and other areas.

The 911 Turbo was widely hailed as the best car in the world, by press and public alike and has ensured that another generation covets this range-topping car as their ultimate dream machine.

The 996-model 911 Turbo is a car that rewrites the rulebook when it comes to performance, handling, safety and, well, driving enjoyment. It is just so good at everything it does. In fact, you could argue that it’s rather too good. There are very few places in the world that you can exploit the 911 Turbo’s full potential. 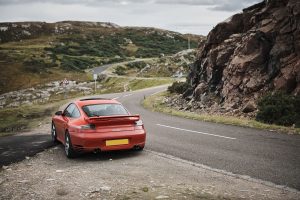 But that doesn’t stop me trying. Porsche claims a top speed of 190mph which I’m certainly not going to attempt on the public road, but what’s far more fun than top speed is getting there,  acceleration in other words. And the 911 Turbo gets there remarkably swiftly, with 62mph arriving in 4.2 seconds and 100mph in, wait for it, 9.2 seconds.

Those figures only tell part of the story, though; you have to experience the performance to believe it. Floor the throttle (something you rarely get the chance to do with this car, believe me) and the rear-mounted, 420bhp, water-cooled engine catapults me forwards. As I’m pressed back into the leather-clad seat, I flick quickly from first to second as the red line is hit (the electronic rev limiter means you don’t suddenly lose power at the red line), and then into third gear. The passing hedgerows are, literally, a blur as the digital speedometer gives up trying and resorts to counting up in five mile-per-hour increments.

And this is the scary thing, I’m now travelling at well over 100mph without even realising it. Not only did the 911 Turbo get me here astonishingly quickly (I didn’t time it, but that 9.2-second figure seems quite realistic) but also with the minimum of fuss and with none of that on/off turbo boost of older cars. At no point did I feel out of control as I was thrown into licence-losing territory. And now I’m here, the car feels stable, safe and if I wasn’t about to run out of road, and I didn’t value my licence, could quite happily continue accelerating to truly stratospheric speeds.

As it is, though, I ease off the throttle to negotiate some upcoming bends. Although, if the truth be known, the Turbo’s finely balanced chassis would probably make mincemeat of the corners at far higher speeds than I’m prepared to try. Being a cautious bloke, and one who’s used to older 911s, I take the first bend (relatively) slowly and accelerate out of it. Wow! Let’s try that again. At the next corner I’m more ambitious and enter it much faster and exit faster still. No problems; the firm but supple suspension and massive tyres take it all in their stride. I don’t even have to try. 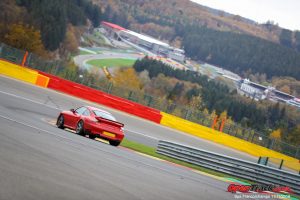 What I do have to concentrate on, though, is the road ahead. The 911 Turbo may be good, but at these speeds it’s down to me to look well ahead for potential hazards. There’s a car winding towards me along the narrow road so I hit the brakes. This Turbo has the standard steel discs, not the optional ceramic jobs, but no matter, their stopping power is just as impressive as the car’s acceleration. I’m pushed forward against the seatbelt as the massive red calipers bring me back to normality.

I’ve hit some traffic now but the Turbo is just as happy tootling along as it is at hyperspeeds. Unlike some performance cars, this one is very easy to drive. The clutch, gearbox and steering all take delight in making your life as simple as possible, while the all-leather interior with its climate control makes a most agreeable cocoon from the cold, damp weather outside.

I’m frustrated, though, being stuck behind lesser machinery and, as soon as I spot a gap, I drop down to second, flick the wheel to the right and just dap the throttle (like I said, full acceleration is rarely needed. That’s it, I’m past and ready to have some more fun.

Eventually, all good things come to an end, and I come to a stop to give the car (and, more importantly, perhaps, me) a break. As the projectile sits there, its engine ticking-ticking as it cools, and the brakes emitting that unmistakable smell of hot pads, I reflect on what an amazing machine this is.

Is it too good? I ask myself. Is it like playing GT2 in, Easy mode on the PlayStation? Well, yes, maybe it is. An average driver on average roads can drive a 911 Turbo at very high speeds in comparative safety. But that, surely, has to be a good thing. The wayward handling of earlier 911 Turbos became legendary for catching out inexperienced and unwary drivers, but that nasty element has been genetically removed from this generation.

Oh yes, owners of these older cars are going to bemoan the fact that the Turbo has lost its character. Lost what makes a 911 a 911. Maybe that’s true, but I’d rather say this latest incarnation has redefined what a 911 is. Moved the goalposts, upped the ante, sent the opposition back to the drawing board. Call it what you like, but if Porsche hadn’t make the Turbo supremely great, than I’m sure it would have faced even greater criticism.

If you like your 911s to be raw, then buy a GT3, which gives you the pure, unsullied, rear-wheel-drive 911 experience in bucketfuls. And very good it is, too. Here, though, we have a very different car. A more sophisticated and forgiving car, with four-wheel-drive and PSM (Porsche Stability Management) to step in and give you a helping hand if things all get too much.

The GT3 is a car to be a hooligan in, whereas the 911 Turbo allows you to traverse long distances at high speed and in safety and comfort, while having a great deal of fun at the same time! 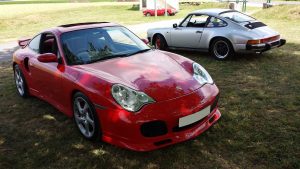 Cabriolet The 911 Turbo Cabriolet appeared in September 2003, using essentially the same bodyshell as the Carrera 4S Cabriolet, but with the air intakes in the rear wings.

At its maximum speed of 189mph air flows through the front-mounted radiators at 100 cubic feet per second.