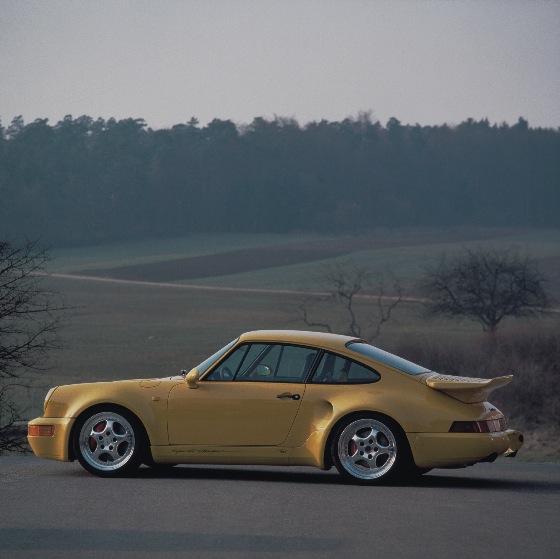 When the original 911 Turbo was being conceived, Porsche toyed with the idea of making it a stripped special, along the lines of then then-contemporary Carrera 2.7RS. In the end, though, it was decided to make the car a fully specked luxury tourer. And as the years went on the 911 Turbo became more and more loaded with luxuries such as full leather electric seats, multi-speaker sound systems and air-conditioning. This suited the market, but the downside was that the Turbo became more and more heavy, the 964 version weighed in at 1470kg.

So in 1992 Porsche offered a 911 Turbo that was, not only lighter, but also more powerful. This was inspired in part by stripped out Turbos that were doing remarkably well in GT racing and, not surprisingly, customers were asking for road-legal replicas.

The 911 Turbo S, as the new car was badged, was around 180kg lighter than the standard Turbo, and this weight saving was achieved by, in effect, copying the bodyshell of Carrera 2 RS. Out went ‘uxuries’ such as electric windows and seats, rear seats, air-conditioning, radio, central locking, rear wiper and power steering. In went thinner side and rear window glass, while the doors, bonnet and engine lid were made from carbonfibre-reinforced glassfibre.

The Turbo’s bulging wheelarches remained, with the rear ones gaining huge intakes to funnel cooling air to the brakes. Similar intakes appeared in the front bumper in place of the usual driving lights while, at the back, a lightweight teatray spoiler was made of glass fibre and lacked the standard rubber edges.

Underneath that spoiler was a modified engine that produced 381bhp (a massive 61bhp increase over the standard Turbo). This was achieved by keeping the capacity at 3299cc, but fitting a larger turbocharger, larger valves, and tweaking the engine management system to give extra boost and altered ignition timing. Despite this, the car remained remarkably drivable, and was claimed to reach 60mph in just 4.5 seconds, with a top speed in excess of 180mph.

To cope with the extra power, uprated brakes with red calipers were fitted behind new 18-inch Speedline wheels. These three-piece alloys gave the Turbo S a distinctive and aggressive appearance. Also updated was the suspension, along RS lines. It was lowered by 38mm and fitted with updated springs and dampers to give a very firm ride, indeed.