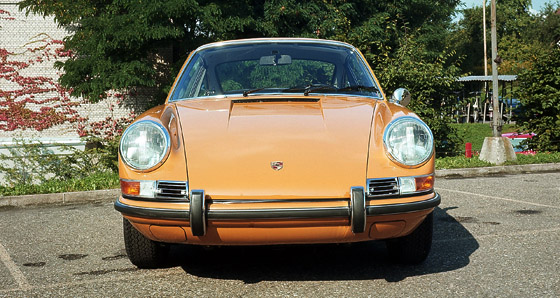 In 1968 the 911 received its first significant update, to become what is known as the B series. Central to the new model line-up was the 911E, which replaced the 911L as the standard car. The E stood for Einspritz, which is German for injection. Yes, the new car used Bosch mechanical fuel injection instead of carburettors.

This innovation raised the power of the 2.0-litre engine (which usually had a green shroud) to 140bhp, and negated the need for an air-pump. The crankshaft was now made from lightweight magnesium, not aluminium, although in other ways the powerplant remained fundamentally unchanged.

However, the really important change to all of the B series cars was a small but significant increase of 57mm to the wheelbase. This was achieved by moving the wheels backwards by lengthening the trailing arms and allowing the driveshafts to be slightly angled (the engine position remained unchanged). Obviously the rear wheel arches had to repositioned further back, too, and this led to a bigger gap between the rears of the doors and the rear arches. At the same time, the arches were slightly flared to accommodate wider wheels and tyres.

The reason for moving the wheels back was primarily to reduce the amount that the engine overhung the rear of the car. This, plus a slight decrease in engine weight, changed the front/rear weight distribution from 41.5/58.5 to 43/57, which significantly improved the cars handling characteristics.

In a further attempt to improve handling and (more so) ride quality, the 911E was fitted with self-levelling hydropneumatic dampers, which negated the need for front torsion bars and antiroll bar. Developed by Boge in conjunction with Porsche, this novel system proved to be prone to leaks and sagging, so over the years many Es so-equipped have been converted to conventional springing. Indeed, Porsche offered such a set-up when the cars were new, for buyers looking for sportier handling. On the other hand, if you wanted a really soft ride, you could specify smaller 14-inch wheels with higher-profile tyres.

Interior changes were less fundamental. There was a smaller steering wheel, an ashtray in the centre of the dash lower edge, larger storage bins in the doors, and a revised heater system that eliminated the Beetle-style air intakes on the inner sills. Also, because the fuel injection system meant there could be a conventional choke knob, Porsche added a hand throttle between the seats to allow the driver to tweak the idling speed while the engine was cold.

Outside, too, there were minor updates. The horn grilles in the front quarter were now smaller, and the indicator lenses correspondingly larger. The front opening quarter windows were deleted, while the engine lid grille became a simpler design with more emphasise on the horizontal slats.

The 911E is an interesting classic Porsche today. However, you are very unlikely to find one that still has the original hydropneumatic front suspension set-up; most have either been scrapped or had conventional dampers and torsion bars fitted.

Targa The 911E was offered in Targa form, which was basically the same as the previous model, although there were now vents in the sides of the roll hoop that improved cabin ventilation. Also for ventilation, opening front quarter lights remained on the Targa.

Sportomatic The Sportomatic clutchless transmission was available for the 911E.

The B-series 911 coupes were the first to be offered with an electrically heated rear window; earlier cars had vents that directed warm air up to the glass.