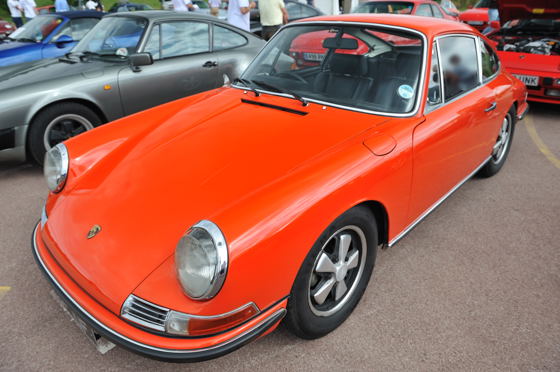 The 911S was updated to B series specification, in line with the 911E. Like the E, the sportier S gained fuel-injection which boosted power to a useful 170bhp. To help cope with the extra demands this put on the engine, an additional oil-cooler was fitted in the front right-hand wing.

Unlike, the 911E, the S retained conventional front suspension to give sportier handling at the expense of ride quality (although the hydropneumatic system was offered on the 911S as a comfort option).

The Fuchs alloy wheels gained in width to 6Jx15 and were fitted with 185/70VR15 tyres, that went some way to improving the handling; which had already been improved by the relocation of the rear wheels by 57mm.

Other changes were as for the 911E, while the new 911S otherwise retained the features of the previous A Series version.

Today, the 911S is the best of the B series range, and this version is the best and most sought-after of the 2.0 litre cars to go for if you can find a good one.

Targa: The 911S continued to be available in Targa form, although the open cars 50kg extra weight and the reduced rigidity of the bodyshell made it a less sporty proposition

The B series 911S had an oil cooler neatly fitted into the front, lower edge of the right-hand front wing. This was later to become a standard feature of all 911s, right up to the end of the air-cooled cars.