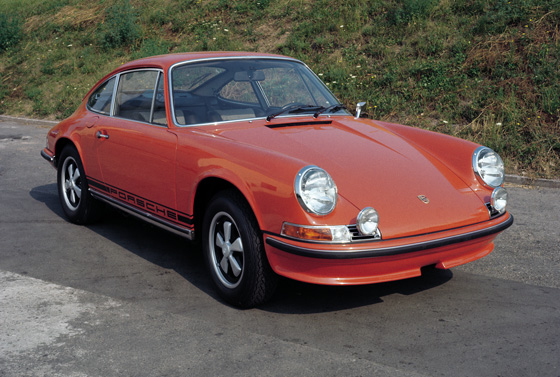 The 911S was updated for the 1972 model year with the same capacity 2341cc engine as the 911E. Porsche somewhat optimistically called this a 2.4-litre powerplant (it’s actually closer to 2.3-litres). The engine was basically the same as that for the 911E but tuned to produce 190bhp, the 200bhp 911 was getting closer!

However, the big news with the 911S was the adoption of a front spoiler, the first time such an aerodynamic aid had been fitted to a production 911. By modern standards this appears to be little more than a modest lip below the bumper, but in the early 1970s it really looked the part, and gave the car a more aggressive appearance (note that the spoiler was optional on E and T models)

More importantly, though, the bumper went some way to improving the 911’s high-speed stability by reducing front-end lift by a claimed 40 percent. This gave a noticeable improvement but in some ways made the rear-end lift even more of a concern, but a spoiler at the back of the car was yet to come. What the 911S did have, though, was the same external oil-filler cap as the 911E, a telltale sign that was limited to this model year. Indeed, in all other ways the S had the same upgrades as the E of the same year, including the 915 gearbox with its “H” gate.

Targa: The open Targa body-style continued as before. This is the first year that it became available for right-hand-drive cars.

The shapely front spoiler of the 911S was actually formed from pressed steel, not plastic as its appearance might suggest.