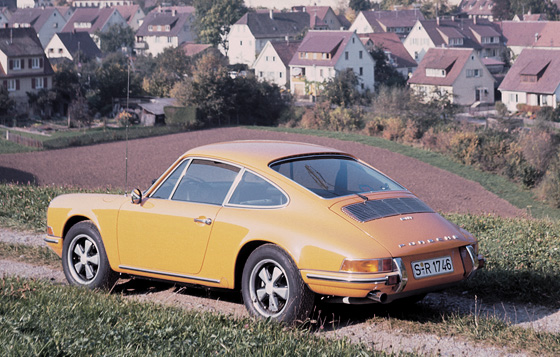 When the 911E and 911S increased their engine capacity to 2.2-litres, their little brother followed suit, and at the same time the 911T gained other benefits, too.

The extra capacity boosted power to 125bhp, while torque rose to 177Nm. Like the 911E, the torque curve was now flatter, making the car more driveable than before.

To save costs more than anything else, the Weber carburettors were replaced by Zenith 40 TIN items (although a few D series cars went back to Webers for a short time).

The use of carburettors and that more useable power made some critics suggest that the 911T was now a better sports car than the more powerful (and expensive) 911S with its revvy and demanding engine.

At the same as the engine upgrade, the 911T received the same ventilated disc brakes as the rest of the range, while a five-speed gearbox became standard fitment.

Steel wheels (5.5Jx 15) remained the standard, but many buyers shunned these for the more attractive (and wider) Fuchs alloys.

The body was basically the same as that for the 911E and 911S, but to keep costs down the bumper centre sections and engine compartment lid were steel, not aluminium.

Today, the 911T is no longer considered the poor relation next to the 911E and 911S. Far from it; enthusiasts appreciate the car for what it is, and the fact it has carburettors and not fuel injection makes it an attractive proposition for do-it-yourself mechanics.

Targa: The open Targa body-style continued with just minor improvements to the seals around the lift-out section.

Sportomatic: The clutchless transmission system was an option on the 911T.

The ultra-rare 911S-T was a stripped down 911T fitted with an uprated 911S engine and lightweight body panels. Just a handful were built for racing purposes and those that remain are ultra-rare and sought after.