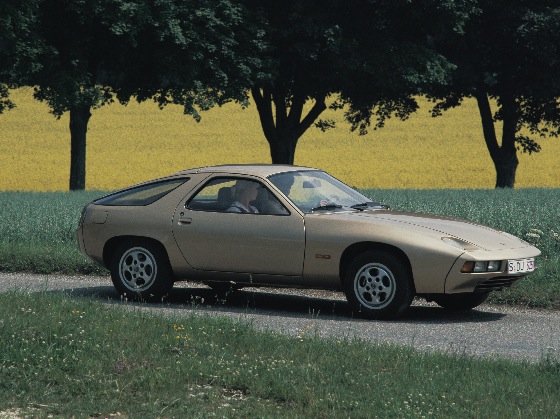 In the early 1970s, Porsche was concerned that its 911 couldn’t continue in production indefinitely. There were concerns over regulations on noise, emissions and the crash safety of rear-engined cars.

With that in mind, the company started work on a possible successor to the 911, and the result was the futuristic-looking 928.

The 928 featured a large, front-mounted, 4.5-litre, watercooled V8 engine made from alloy, with a single overhead camshaft. It drove the rear wheels only. To ensure a near-perfect front-to-rear weight distribution the 928 (like the 924) had a rear-mounted gearbox, or transaxle, between the back wheels. There was a choice of five-speed manual or three-speed automatic transmission.

The rear suspension was notable for its Porsche-Weissach patent geometry. This essentially offered a form of passive rear wheel steering during certainly off-throttle cornering situations.

The bodyshell was a combination of galvanised steel and aluminium (the latter material used for the doors and bonnet), with the front and rear bumper panels being made from deformable plastic  a radical feature in their day, but commonplace today.

Inside, the car was well-appointed with two front seats and two occasional rear seats. A large glass hatchback gave access to the rear luggage compartment. An unusual feature was an instrument binnacle that moved with the adjustable steering column.

The 928 was unveiled at the 1977 Geneva motor show and went on sale the following year, when it also won the European Car of the Year award the first and only time this has been given to a sports car. 0-60mph: 8.0sec Top speed: 138mph