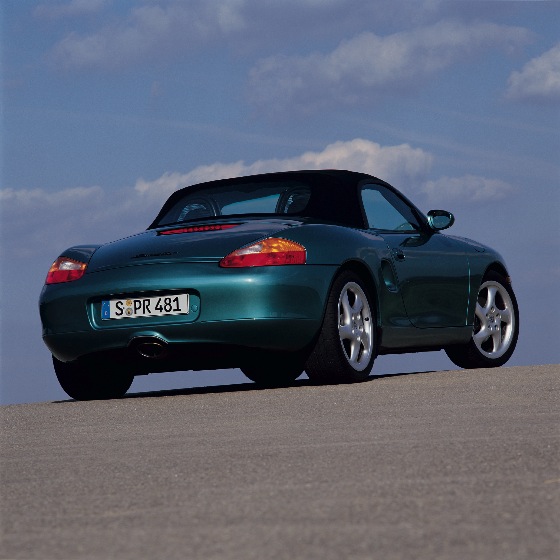 Developed in conjunction with the 996-model 911, the Boxster was an entry-level model to replace the aging 968. It was an all-new design that carried nothing over from the previous Porsche. In order to reduce costs, the new car was cleverly developed in close conjunction with the new 996-model 911. Indeed, from the front bulkhead, the Boxster and 996 were virtually identical.  The Boxster (internal model number 986) was an open-topped car with a mid-mounted, water-cooled flat-six engine that was similar to the larger unit in the 996. The 2.5-litre engine had four valves per cylinder, VarioCam variable valve timing and Bosch Motronic engine management. The engine was totally hidden from view all the owner could see was filler caps for the oil and coolant. Strictly a two-seater, the cockpit was modern and well-equipped, with an electrically operated hood that folded neatly away when open. A hard-top was an optional extra. Luggage could be stored in compartments at the front and back of the car. With 204bhp on tap, the Boxster offered reasonable but not earth-shattering performance it was universally agreed that the car’s mid-engined configuration could cope with much more power.