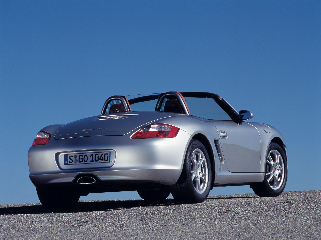 Launched at the Geneva Motor Show in 2004, for availability in 2005, the Boxster received a major makeover. The front was treated to new headlights to distinguish it further from the 911, and a new nose with large intakes. At the back, meanwhile, the wings became more shapely and there were new light clusters.

The interior was all-new, with a neater instrument binnacle, round air vents, and an angular centre console that was similar to that in the 997-model 911. The three-spoke steering wheel was also not unlike the 911 item.

The same 2.7-litre engine was retained, albeit tweaked by 12bhp to produce 240bhp. This gave a 0-62mph time of 6.2 seconds and a top speed of 159mph. Standard fare was a five-speed gearbox, while a six-speed manual was optional, as was Tiptronic.

Standard on the new Boxster was PSM (Porsche Stability Management), essentially a form of traction control.

A new option was Porsche Active Suspension Management (PASM) which allowed the suspension to be adjusted from a softer, comfortable ride, to a harder setting for sporty driving, effectively giving two cars in one.

Another new option was the Porsche Chrono Package, borrowed from the 997. This gave a modified engine map and a sophisticated stopwatch system.