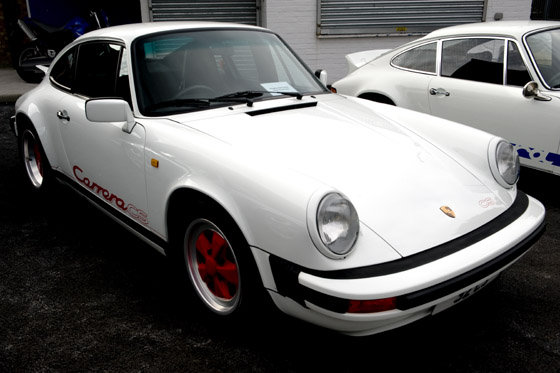 When Porsche wanted to build a 911RS for the 1980s, it came up with the Carrera 3.2 Club Sport, a car which, like an RS, has gone on to become a sought-after classic.

Also like the RS before it, the key to the Club Sport is lightness. Without going crazy, Porsche sliced around 40kg off the standard car’s 1210kg. This was done by omitting unnecessary luxuries including electric windows, rear seats, rear wiper, radio, rear quarter panels, door-pocket lids, central locking, engine- and luggage-compartment lights, passenger sun visor, underseal (although some UK cars retained some protection), some sound-deadening (that in the engine bay and roof lining remained), and even the coat hooks. There were manual heater controls (as fitted on earlier 911s) instead of an automatic thermostat system, while air-conditioning was deleted in markets where that was standard.

In addition, the car was fitted with a lighter starter motor, simplified (and therefore lighter) wiring loom, and an alloy spare wheel.

Despite the reduced specification, the Club Sport’s interior was far from austere, with full carpeting (including over the rear seat area, and comfortable pinstripe fabric seats (some examples had leather seats).

Mechanically, the car retained the standard 3.2 engine, albeit blueprinted, fitted with lighter hollow inlet valves and located on stiffer mounts. A revised engine management system increased the rev limit from 6520rpm to 6840rpm but, bizarrely, Porsche didn’t claim any increase in power over the standard engine’s 231bhp.

The power went through a G50 gearbox with a shorter throw and taller fourth and fifth gears, and a limited-slip differential. Suspension, meanwhile, was updated with nothing more than Bilstein gas dampers all round.

The majority of Club Sports were finished in Grand Prix White with the option of large Carrera CS side decals in bright red. The Fuchs alloy wheels usually had matching red centres, but could also be specified in black or white

Only 340 Club Sports were built, with 53 right-hand-drive examples coming to the UK, where road-testers received it with open arms; Motor claimed it to be the fastest 911 it had driven, and good value at some £3000 cheaper than the standard car. However, it was less warmly received by the US press, who couldn’t see the point of paying over the odds (the car was priced higher in that market) for a Porsche with a reduced specification. Indeed, only 28 examples were sold in the USA.

Perhaps it would have fared better if Porsche had increased the engine power. Interestingly, though, probably because of the revised ECU, Club Sport engines have since been found to produce around 240-245bhp a useful improvement that buyers never knew about when the cars were new.

Of course, the reduced weight goes some way to improving the performance, with slight improvements to acceleration and top speed; 0-60mph was down from 5.6 to 5.1 seconds, while top speed went up from 148mph to 151mph.

But these small changes don’t tell the whole story; to drive the Club Sport is quite a different animal to the standard Carrera 3.2. The engine is more responsive and eager to rev and, with the lack of soundproofing, sounds just wonderful from inside the cabin. Road noise, too, is very apparent, so it’s not a car for long journeys, but it is very rewarding on winding roads or a racetrack.