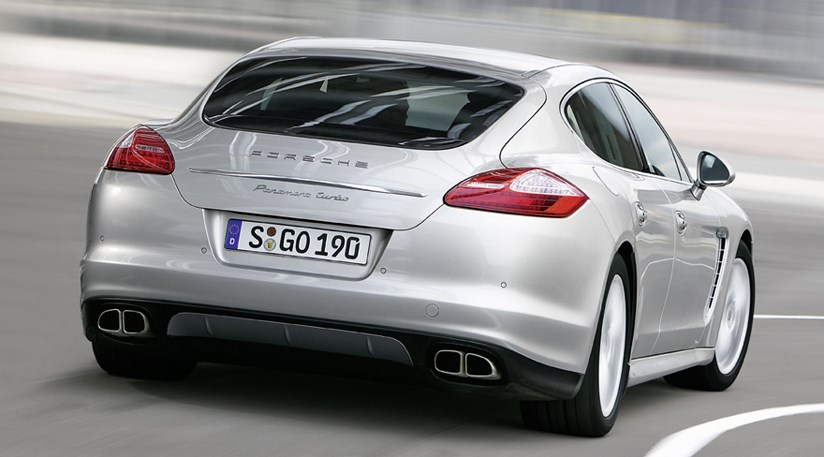 If debuting the Panamera S & 4S with a 4.8L naturally aspirated V8 wasn’t enough to entice purist Porsche owners into the Panamera lineup, a twin turbo version was also introduced, the Panamera Turbo. The turbo model joined a prestigious line up of Turbo models within Porsche and stayed true to offer superior performance.

To compliment the V8, two turbochargers were arranged in parallel to deliver boost at a maximum of 0.85 bar dependant on engine speed. With the Sports Chrono Package optioned, the boost would be increased by approximately 10% by an ‘overboost’ function. The engine also utilised charge air coolers, one per cylinder bank for higher air charge rates and also provide lower component temperatures.

The bi-product of that Turbo technology means that the 0 – 62mph time for the Panamera Turbo was a mere 4.0 seconds with the Sports Chrono Package fitted (4.2 seconds without). For comparison in 2009, that was 0.2 seconds faster than an Aston Martin DBS.

Other than superior performance, the Turbo can be set apart from other Panamera models with exclusive 19 inch wheels, red brake calipers, a larger front bumper, dual twin-exhaust tips, daytime LED running lights and larger air outlets within the wing just behind the front wheels. The Panamera Turbo is also fitted as standard with Porsche’s air suspension system (PASM) with three damper modes.

An auto deploying rear wing integrated into the rear lid is fitted as standard to Panamera models and opens at 55mph, however on the Turbo model its a split piece wing that once deployed makes the rear wing wider to reduce lift at the rear wheels at high speeds.