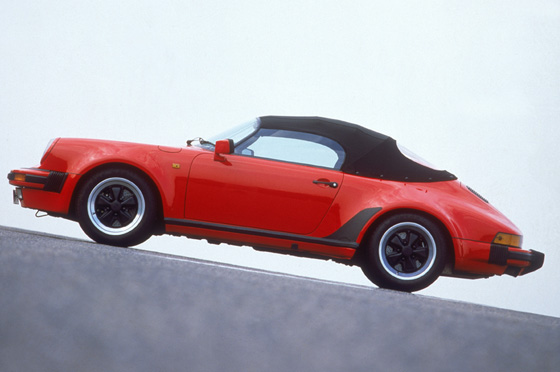 Right at the end of the Carrera 3.2 production, Porsche built a limited number of a very special 911. The Speedster was inspired by the classic 356 Speedster of the 1950s. This sleek machine was based on the 356 but had a cut-down windscreen and low hood to give a chopped appearance to appeal to American buyers.

The 911 Speedster was based on the 3.2 Carrera and achieved a similar look by way of a lower, more steeply raked windscreen in a lightweight aluminium frame. The hood was correspondingly lower and sat atop smaller, frameless side windows.

When the hood was lowered it was stored under a twin-humped plastic panel that took the place of rear seats. The hood was manually operated, and the hump hinged back to allow the hood to drop. Porsche stress to would-be buyers of the Speedster that the relatively simple hood was not designed to be fully waterproof or windproof. In other words, the car was designed to be a fine-weather vehicle only.

The majority of the 2065 Speedsters built had the wide Turbo-Look front and rear wings, although a few were built with the narrow body, while a handful were Slant-Noses.

Inside, the Speedster had a basic specification similar to that of the contemporary ClubSport. The windows were manually operated, as were the heater and seats. The latter were from the ClubSport and were set lower in their mounts to give sufficient headroom with the lower roof. There were no rear seats because the area was taken up by the hood cover, although there was some storage space below.

The 1989 Speedster is a rare and attractive car, but is not practical as an everyday Porsche it’s more a fine-weather machine to take out at weekends.

The Speedster was the last 911 to be built at the original factory at Zuffenhausen. The all-new 964-model 911 would be made at a new facility.