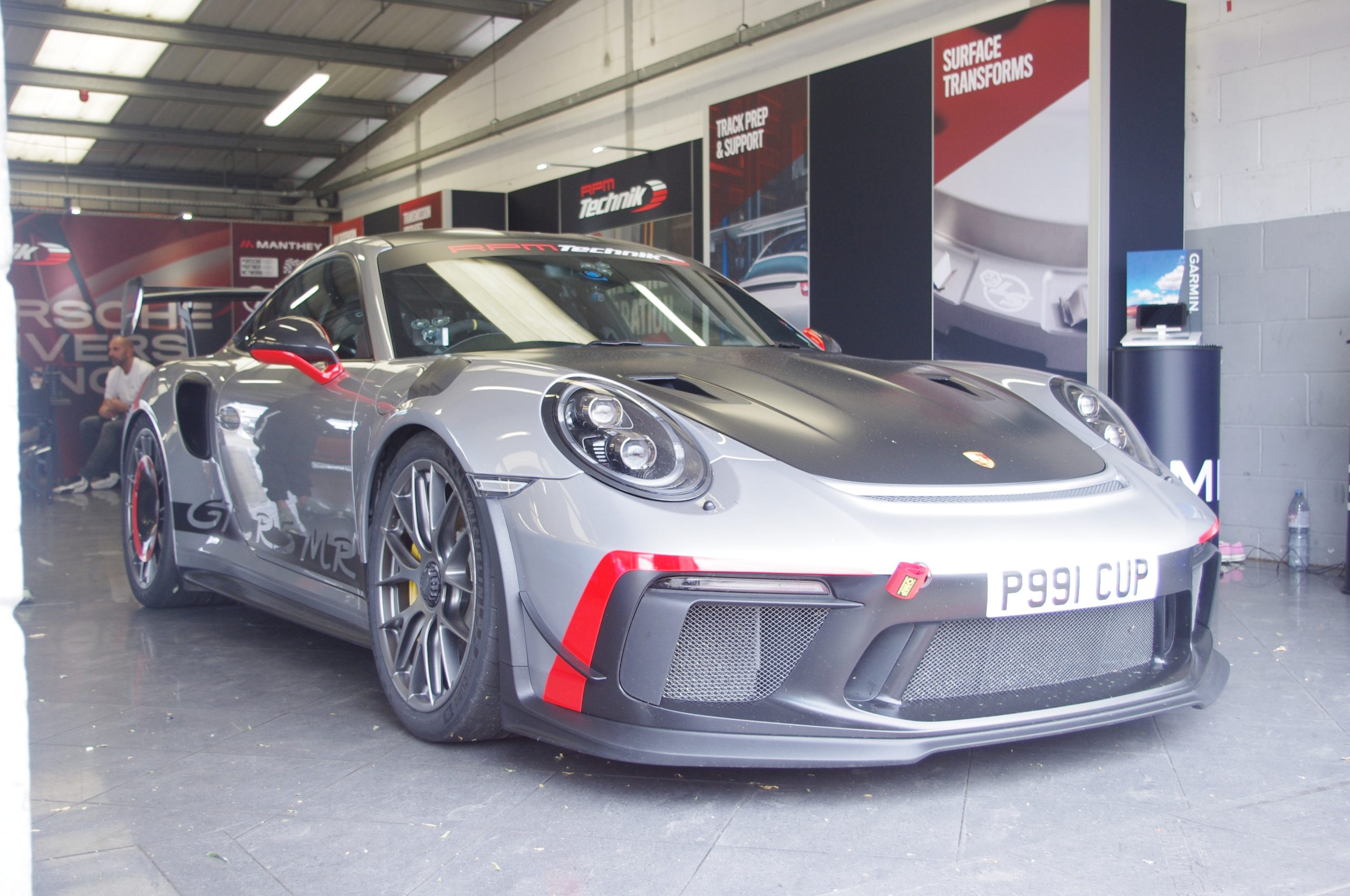 We prioritise getting involved with the community and the best businesses offering Porsche products, so we are starting a series of articles on Porsche Specialists. Companies that sell, buy, modify, service, tune, rebuild, wrap, remap, custom paint Porsches, and of course everything else you can do to make your Porsche extraordinary. Our mission is to give readers a full understanding of services, and share the best of the best Porsche specialists. These are not sponsored articles, we would like to make it clear that we are a separate entity to all businesses that we write about and aim to be unbiased in our reviews. RPM Technik was very kind to invite us to begin this series of articles. 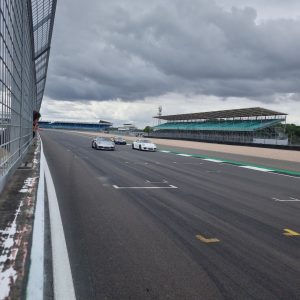 If you are a Porsche owner in the UK, you more than likely have heard of, or used the services provided by, RPM Technik. We first got the idea to visit RPM Technik when we saw the amazing 718 Cayman GT4 MR at the Festival of Speed. So, we reached out and spoke with Darren, their Commercial Director, who invited us in to spend some time with their business and look at the Manthey Racing upgrades (which we learnt is pronounced “Man-tai”). The original plan was to meet RPM at their head office, however Darren told us that they would have the Manthey GT4 MR, and GT3RS MR models at Silverstone, which wasn’t a hard sell for us to meet at the world-famous racetrack! The day itself was hosted by Porsche Club GB as a members only track-day (more on this further below).

Quite suitably, the car we saw on display at Goodwood, was the same car which we were pleased to spend some time with at Silverstone. This very cool GT4 has a custom wrap completely made by RPM from design to execution and it has a complete Manthey upgrade as well as some extra mods from RPM themselves. RPM were actually the first company in the UK to receive full training from Manthey to carry out their upgrades, and while there are a few more places now that do the upgrades, RPM has some of the most experienced technicians in the UK. 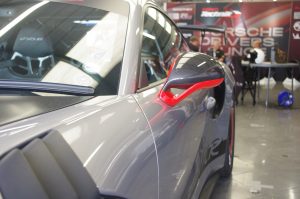 RPM Technik are a best-of-the-best Porsche Specialist that offer everything you need in Porsche ownership. One of the first things I noticed about RPM is that they have had their team working with them/Porsche for decades! This always puts my mind to rest when looking at a business – it speaks volumes for the company and in my experience long-term staff make less mistakes due to their skillset and teamwork. We would highly recommend RPM for Servicing and Upgrading your Porsche, there are very few better alternatives. If you are looking at buying/selling, they can take care of that for you too!

Within this article, we focus mainly on what RPM do with Manthey Racing upgrades, however there is a full list of everything that is available on their website.

RPM Technik started as a very small operation by Ollie Preston in 2001 out of a single car lockup. With 10 years of experience working on air-cooled Porsche models, he managed to start his own business, which I’m sure we can all appreciate as it’s not an easy task! He was joined by Darren Anderson a few years later and then the last member of the team of directors joined, Greig Daly. These men now run one of the UK’s premier independent Porsche specialists and are one of very few who have received an official Porsche Partner Network status. This means they have full access to the factory technical support and they also have 2 PIWIS 3 Porsche Laptops allowing them to carry out factory diagnostics support and daily updates from Porsche technical.

We were lucky enough to meet both Darren and Greig at the event in Silverstone. Both very easy going and kind gentlemen. We were made to feel very welcome and even got offered a lap around Silverstone in the passenger seat of the GT4 MR, more on that later. 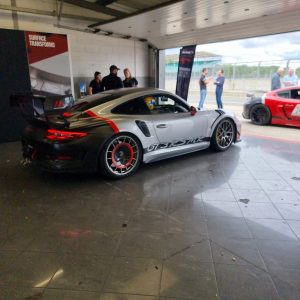 Tim Harvey was present as well in his GT3 RS that has had a full Manthey upgrade and was driving on Michelin Cup2 R tyres. This thing was absolutely mesmerising! A fun fact about the exhaust system on this vehicle: as you can see it’s pointed down. This is to lower the amount of noise this car makes (I think one of our Directors could use this on his heavily upgraded 996 Turbo…). As the sound leaves the exhaust it hits the track, part of it gets absorbed by the tarmac as it bounces back up. A clever way of getting the Db down a notch to be able to meet the requirements of the track.

Tim works with RPM as a Chassis and Development consultant but is probably more recognised as one of the UK’s most successful racing drivers, best known for winning the 1992 BTCC Championship and was the Porsche Carrera Cup champion in both 2008 and 2010. As he knows his way best around the track he has been a key element in the final setup of RPM’s customers that had any Manthey upgrades. 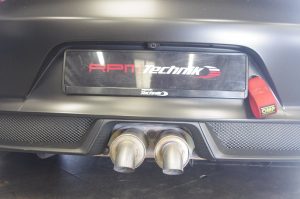 We’ve talked a lot about Manthey without really explaining what exactly it is or what they do, I’m sure by now you’ve realised it has something to do with upgrading Porsches. Manthey is a race team based in Germany setup in 1996 by Olaf Manthey. With extensive success racing Porsche in all sorts of race classes, and with these amazing results at such a high level, Porsche themselves expressed their interest.

Now, Manthey is owned 51% by Porsche AG. This means that any Manthey upgrade installed and signed off by a technician with Manthey qualifications does not invalidate Porsche warranty. You can even do a tickbox exercise so the car gets built with the upgrades straight from Reading. The upgrades have been tested on circuits across the entire world including the Nordschleife. In fact the 991 GT2 RS MR (Manthey-Racing) achieved a fantastic lap at the Nürburgring in October 2018. Clearing the track in 6:40.33 makes it the fastest road-legal sports car ever. 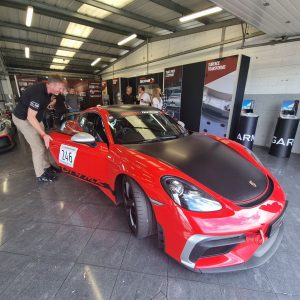 Being in this environment was an absolute privilege and we can’t thank the guys at RPM Technik for it enough. The drive on the track was especially great and a giant cherry on top of the smaller cherry that was already on a great cake. Greig (RPM Sales Director) brought us on track with him and we did the Grand Prix track in the 718 GT4 MR on Michelin Cup 2 tyres. This vehicle is simply stunning! It features 4 litre, 6 cylinder engine with 420 PS and a max torque at 420 Nm.

The moment I sat inside the GT4 MR, the car and upgrades absolutely oozed in quality and precision. The interior is outfitted with a roll-cage, bucket seats and a racing harness option – which is a must when looking at a track-based Cayman GT4. Once inside and equipped with a racing helmet, your eyes are only focused forward, and the GT4 MR demonstrator has a track info system fitted by Garmin, giving live track timings, making the driver aware if they are better than their previous lap, and makes the overall experience on track more immersive. The Cayman GT4 MR is a great example of what Manthey Racing and RPM can do to make your Porsche special. It is nearly unmatched, and gives you that incredible sensation of pinning you back into your seat as it climbs speed, and throws you forward as you hit the brakes – EXACTLY why you need the racing harness to catch you! 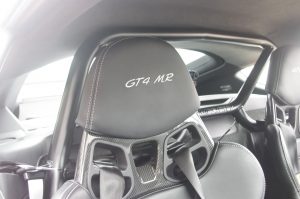 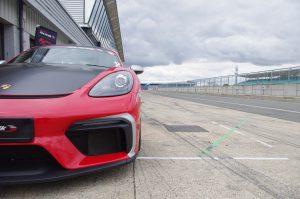 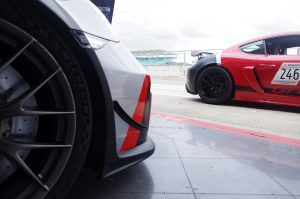 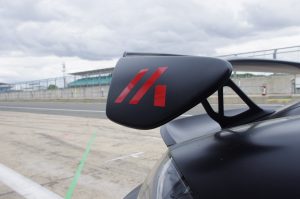 The GT4 MR has had a total makeover and has had an obscene amount of upgrades including, chassis optimisation, a Manthey Tie Rod Set, the Manthey Track upgrade kit, Manthey Coilovers, Cargraphic Valve Controller, Exhausts, Performance tyre Michelin Pilot Sport Cup2, Surface transforms Ceramic brakes, Low ratio crownwheel and Pinion, lightweight flywheel and Clutch assemblies, and of course a full Manthey MR conversion. All of these combined certainly make such a huge difference driving this car on track.

Greig took us on track and you can instantly feel that this is no “normal” Porsche GT4, the centrally located engine on the GT4 makes you really love the speed around the corners and because this sensational machine has a manual gearbox it is so much more engaging. The brakes are upgraded Surface transforms Ceramic brakes and I cannot recommend these enough! This particular upgrade I feel is needed when looking at everything else done to the car, as it meant that Greig could brake much later and carry more speed around corners, maintaining perfect grip. It is exhilarating feeling it go through the tweaked gearing and hitting top speeds. I clocked the top speed during our laps at 147 mph before braking into the corner, which is just mind-blowing and felt like one of the fastest Porsche’s I have been in. At this event it was overtaking by invitation only, but as we were so quick a lot of drivers gave us the opportunity to do so. 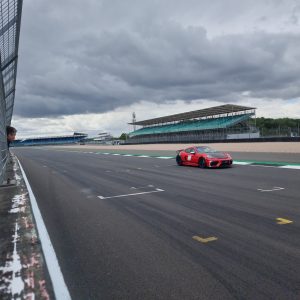 The way Greig drove this vehicle was an achievement in itself, as he knew the upgraded GT4 MR inside and out, and really pushed it to it’s capabilities, a very talented driver. I did notice he really liked to let the car skid now and then as we went through the loop. As it started raining at the end of our laptime he did a proper drift in the Luffield approaching the National Pits Straight, simply amazing!

At Silverstone, there was a huge amount of Porsche Club GB members with the event fully sold out, and it seems that one of the most popular models to go on track was certainly different variations of the Cayman as well as a huge number of GT3 / GT3 RS 911’s. Some of the most notable cars that was unique in style, was the ONLY Ultraviolet Cayman GT4 in the UK, running alongside another rare colour – Ruby Star Cayman GT4! What a combo! A beautiful 911 to note was a 991 GT2RS, and the latest 992 GT3 in Shark Blue and a Martini Racing livery which looked fantastic.

That being said the most unique car seen, was a 911 991 GT3 Cup – track only 911 race car. The one we saw was finished in a light green and plastered in sponsors, the huge wheels were running on racing slicks, and were greatly cambered. The rear wing was absolutely massive, and the GT3 Cup dominated Silverstone track, we didn’t witness anything get a chance to overtake throughout the day.

Very unique cars on track, with some spectacular driving ability on display. Glad to report that nobody crashed on track whilst we was present and was nice clean racing. That being said, due to the caliber of the Porsche’s on track, the drivers were truly pushing it. Cars present were: multiple 911 GT models, huge number of Cayman’s/Boxster’s of all ages, 911 Turbo’s and much more!

We had a great day with RPM Technik at Silverstone and hope to be able to meet these people at their premises in Long Marston, Hertfordshire. Please do go and have a look on their website as they offer such a wide variety of services and are very good at what they do. A special thanks to Darren and Greig of course for making this day possible and also to Zoe and Sam for making us feel welcome from the first second and taking great pictures. 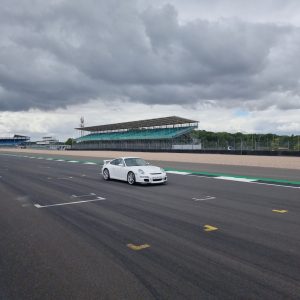 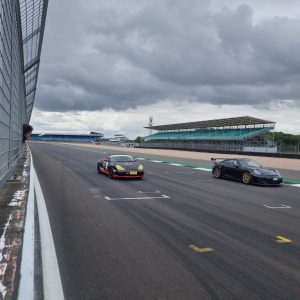 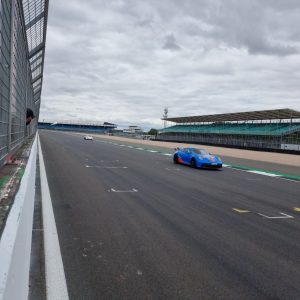 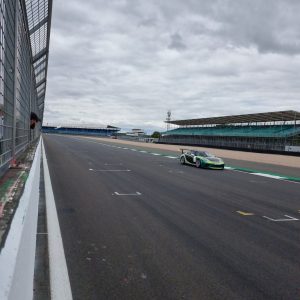