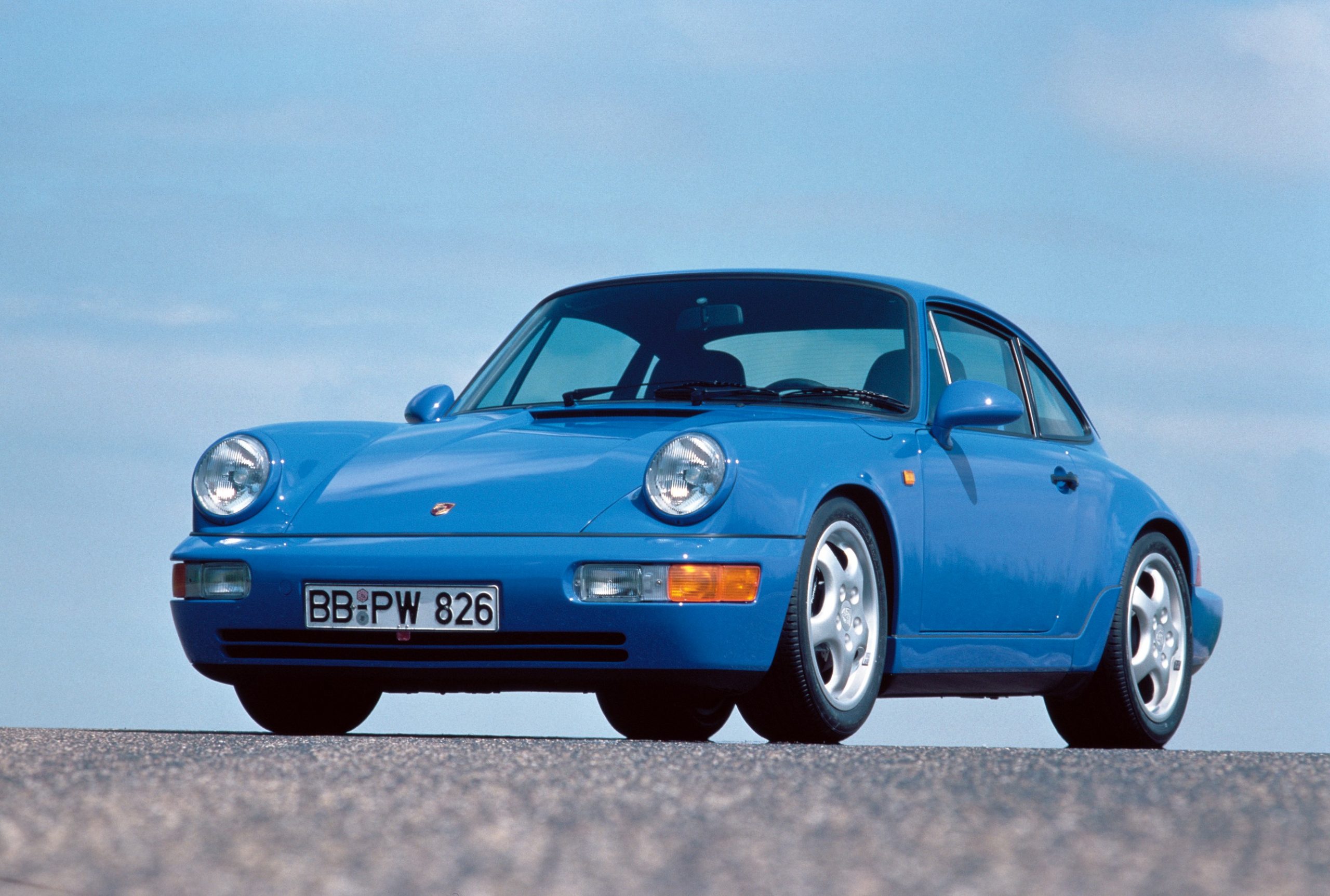 By the early 1990s, the 911 had put on weight. Extra creature comforts and sound insulation meant that the Carrera 2 weighed 1350kg (and the Carrera 4 with its four-wheel-drive came in 100kg heavier). Inspired by the Carrera Cup race cars, then, Porsche put into production a lightweight 911.

A worthy successor to the 1973 RS, the new car was named ‘Carrera 2 RS’ and like its predecessor, weight reduction was paramount, especially in the case of the Sport (also known as Lightweight) version. Around 120kg was shaved from the car by deleting ‘luxuries’ such as a sunroof, electric windows, electric mirrors, rear seats, door pockets, and much of the sound insulation, while the side windows were made of thinner (and therefore lighter) glass and a simple two-speaker radio/cassette player was optional. Seats were lightweight Recaros and there were simple, racecar-style pull-straps on the doors.

Further weight was saved by the fitment of magnesium alloy Cup wheels, which were 17-inches in diameter, 7.5-inches wide at the front and 9.0-inches at the back.

The lightening process went a long way to make the RS feel faster and more nimble than the standard Carrera, but it was only part of the story. The engine was given a modest 10bhp power boast to 260bhp simply by tweaking the engine management system, while a lightweight, solid flywheel helped the engine to be more responsive and was linked to a harder clutch plate.

The suspension was lowered by 40mm to give the car a more purposeful stance and to improve handling. The latter was further enhanced by rigid rear swing arms, larger antiroll bars (24mm front and 18mm rear), front strut-brace, and much stiffer springs and dampers. The brakes, too, were uprated with a mix of 911 Turbo front discs and Carrera Cup rears.

The bodyshell looked like the standard Carrera item, but was seam-welded for added strength and rigidity, while the wheel-arch returns were rolled to give clearance for the larger wheels and tyres. At the rear, a new-style lightweight bumper was used with protrusions each side of the numberplate to house the lights for said plate. The bonnet was made of lightweight aluminium instead of steel.

The RS in stripped out Sport guise was a no-compromise machine that was most suited to track use, which is why Porsche also offered a Touring version. This was much closer in spec to the standard Carrera 2, but retained the thinner side window glass and aluminium bonnet of the Sport, not to mention the uprated engine and suspension. However, it still didn’t have rear seats. The weight saving was around 50kg compared with the standard car, but the Touring didn’t offer the raw excitement of the Sport.

It is believed that Porsche sold 2051 Carrera 2 RS cars, and just 76 of these were Touring versions. Some say that the Sport is too extreme for road use and they could be right if you want a car for everyday use, but for weekends and trackdays a Carrera 2 RS is hard to beat, and still more affordable than the 1973 version.

Frankly, there is no comparison between a stripped out Carrera 2 RS Sport and the standard Carrera 2. It’s astonishing that just by junking all the heavy non-essential trim Porsche transformed the 964 into a quite different car to the standard Carrera. Power is up by a mere 10bhp to 260bhp, but the RS feels so much faster and more responsive then its stablemate mainly because it’s that much lighter.

What’s more, the suspension has been lowered and firmed up to give firm, near-faultless handling, while the lack of soundproofing makes you feel at one with the car. Finally, a lightweight flywheel gives feather-light throttle response. This 911 does just what you ask it. The throttle, steering, handling and brakes are all so responsive and immediate that other 964s all of a sudden seem dead and heavy in comparison.

On the other hand, the standard Carrera 2 also feels very civilised compared to this pared-down machine. The RS has firm, fixed-back Recaro seats, manual window winders, no sunroof and very little in the way of creature comforts. What’s more, the hard ride and noisy engine take their toll very quickly. Even after a short drive my back was aching and my ears are ringing. But, oh, it was worth it.

But could I live with this as an everyday car? No, I couldn’t. Most of my driving involves long runs on motorways and fast A roads, or sitting in traffic, so an RS Lightweight would be simply too noisy and uncomfortable for this sort of work.

However, if you don’t need an everyday car, the 964 RS is motoring nirvana, and an ideal weekend or track day machine. A sort of Caterham Seven for grown-ups, the RS is a car that encourages you to drive fast, red-lining that wonderful-sounding engine between each gear change.

The 964 Carrera RS offers a sublime driving experience which every Porsche enthusiast should try at least once. But be careful, once you do, you’ll be left with an urge to own one of these great cars!

Carrera 4 Lightweight In 1991, a small number (around 20) 911s were built that had, in effect, Carrera 2 RS bodyshells, suspension and engines, but with four-wheel-drive. These cars were designed for track use and were not put into production.