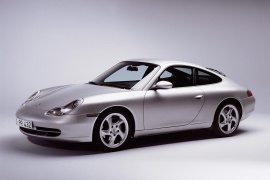 All through the 911’s history, up until 1998, you could trace its heritage right back to that first 911 of 1963. The problem was, though, that Porsche had pushed the envelope to the limit by the time the 993 came along in 1993. In 30 years the 911’s engine power had risen from 130bhp to 300bhp (and that’s just the normally aspirated cars; Turbos were exceeding 400bhp), while the handling had gone from somewhat hairy to almost perfect.Even so, customers were demanding ever more. Porsche knew that, with the 993’s replacement, it would have to offer yet more power and that just wasn’t feasible with the old air-cooled engine, when ever-stricter noise and emissions regulations were being imposed by Europe and North America.

Porsche also wanted to open the 911 to a wider market. And that meant offering a more modern and comfortable car that was, at least in some ways, less quirky than the traditional 911. So in 1991 the company began making plans that would change the 911 forever.

At the same time as a new 911, Porsche started thinking about a replacement for the entry-level 968, and to save costs this would share some parts with the 911. The all-new 911 was given the codename 996, while the cheaper car (which was to become the Boxster) was called 986.

The engine had to be a rear-mounted flat-six to retain the 911’s character but the only way Porsche could keep noise levels down and increase power output, was to make it water-cooled. The resulting all-new 3.4-litre engine was closely related to the smaller 2.5-litre unit being developed for the Boxster. It boasted four valves per cylinder (a first for a production 911) and an output of 300bhp. Power went through a six-speed gearbox or an optional five-speed Tiptronic automatic transmission, with fingertip controls on the steering wheel.

The 996’s bodyshell was also all-new and larger (some 19cm longer) than that of the out-going 911. The extra bulk was required to enable the design to conform to modern crash-testing requirements, to give more interior space (especially for rear passengers) and to make room for a pair of front-mounted radiators; something that previous 911 hadn’t required.

Effectively, the bodyshell was near-identical to that of the Boxster from the front bulkhead forwards, but quite different from there back (the Boxster was a mid-engined roadster, while the 911 was a rear-engined coup).

Although instantly recognisable as a 911, the 996’s smoother, cleaner lines were more modern and more aerodynamically efficient, the body was cheaper to produce, safer in an accident, and quieter at speed. The windscreen was more steeply raked, the air-intake had disappeared from the top of the bonnet, as had the front quarter lights, and there was no longer a full-width rear reflector.

But the most controversial visual change was at the front of the car. The 911’s round headlamps had been replaced by distinctively shaped units with integral orange indicators. Unfortunately, the cheaper Boxster had almost identical light units, making it hard to differentiate between the two cars from the front.

The interior of the 996 was completely new and, again, had some commonality with that of the Boxster. Out went the distinctive but quirky dash design that could be traced right back to 1963, and in its place came a modern, easy to use layout. The trademark five dials with the rev counter central remained, but they were now neatly overlapped to make them more visible through the steering wheel. An easy-to-reach centre console contained the radio (or the optional PCM sat-nav), climate control (one of the benefits of a water-cooled engine was that the 911 could now have a decent heating system) and other minor controls.

Today these early cars are surprisingly affordable, Porsche built more 996s than any previous 911, so there are plenty out there. They may not be as involving as earlier 911s, but a 996 is a practical and comfortable everyday car.

Cabriolet An open-top Cabriolet had a power-operated hood that folded flush with the body when open.

Although the new 996-model 911 Carrera was available from early 1998, Porsche continued to sell the 993-model in Carrera 4 and Turbo forms during that year.