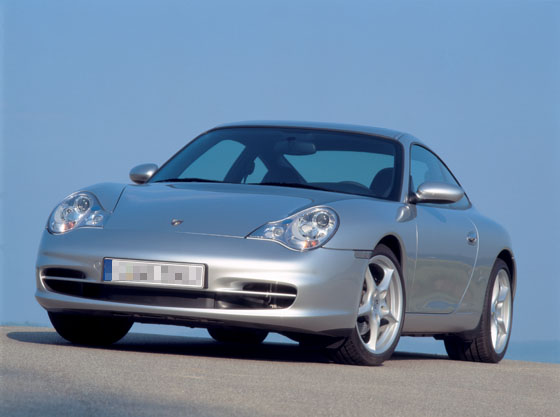 In September 2001, Porsche unveiled a revised 996-model 911 Carrera that answered many of the criticisms of the original version. The new car adopted the shapely headlamps that made the front end more easily distinguishable from the less expensive Boxster. There was also a restyled front bumper with a more prominent lip spoiler while, out the back, the bumper gained a flared out lower section. However, there the update was much more than skin-deep. In fact, Porsche claimed that the engine had 90 percent new components. The capacity was increased from 3387cc to 3596cc by fitting a new crankshaft, connecting rods and pistons to increase the stroke from 78mm to 82.8mm. Furthermore, the valves were controlled by Porsche’s VarioCam Plus technology, which first appeared on the 911 Turbo. This not only adjusted the cam timing, but also the amount the valves lifted. This allowed both slow and fast engine running to be optimised for performance, economy and emissions control. Porsche’s E-gas electronic throttle linkage became standard across the range.

The original 996’s exhaust system attracted complaints that it sounded bland and not like a 911, so Porsche developed a new system that made a more inspiring noise, especially at low revs.

Combined with a new Motronic engine management system, these changes boosted power from 300bhp to 320bhp at 6800rpm, while maximum torque increased to 370Nm at 4250rpm.

The power went through a revised version of the previous six-speed gearbox, with stronger internals and a three, instead of two, bearing input shaft to reduce vibration. As before, a five-speed Tiptronic automatic transmission was optional, but in order to cope with the extra power and torque this was now the same unit as fitted to the 911 Turbo.

The cabin also came in for attention. While remaining essentially the same design, it was treated to a glovebox (something which was sadly lacking from the original 996), revised instrumentation, integral cupholders, electric bonnet and boot releases and new interior lighting in the form of LEDs that bathed the controls with a subtle glow. Where fitted, the PCM sat-nav and telephone systems were updated, while the interior plastics were given a more modern matt finish.

It’s all subtle stuff, but the face-lifted 996 was undoubtedly a better car. The on-paper performance was pretty much unchanged, but the enlarged engine gave a useful boost in low- and mid-range torque, which made the 911 feel more powerful and easier to drive. And there was no doubt that the restyled bodywork made the 911 look less like a Boxster.

Cabriolet: The Cabriolet model continued with a fully electric hood, but now had a more durable glass (in place of plastic) rear window with a heater element.

Targa: The Targa was offered as rear-wheel-drive only and used the same sliding glass roof panel as the previous version.

Porsche celebrated 911’s 40 year history in 2003 (40 Fast Years). The company introduced the 996 “Anniversary Model” in year 2004. It has got 996 Turbo model’s front-end, only available in Carrera GT Silver exterior paint, Variocam Plus, special dynamic sealed panels, and special logo “40 jahre 911” on the back. There was only 1,963 units available, in order to remind the first year of the Porsche 911.

The “40th Anniversary 911” special edition is marking the climax of the outstanding career of what is known as the “996” internally at Porsche. It is based on the rear-wheel drive 911 Carrera Coup and it has sport suspension and many high-quality equipment features. Porsche Carrera GT color

The 911 anniversary model was available exclusively in GT silver metallic – a color that was only available until now for the 612-hp Carrera GT.

The revised 996-model 911 used slightly thinner glass in its windows in an effort to reduce weight.