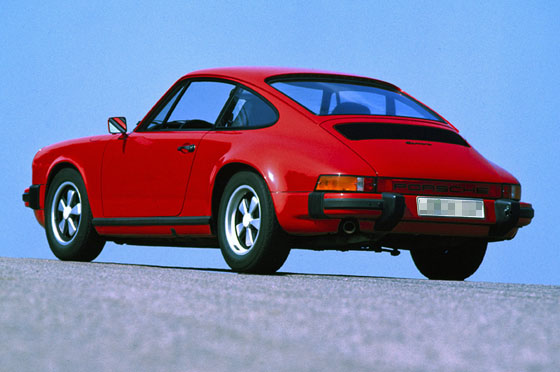 Following the success of the 911 Carrera 2.7RS, Porsche decided to use the Carrera name on its range-topping 911.

The new 911 Carrera used essentially the same 2.7-litre, 210bhp engine as the previous year’s RS for all markets except the USA, where the Carrera used the 175bhp 911S powerplant, in order to conform to emissions regulations.

The body was updated as per the 911 and 911S, with impact-absorbing bumpers, rear reflector and deeper sills. In addition, the ducktail rear spoiler and ‘Carrera’ side decals from the 2.7 RS were available as options (although the rigid spoiler was outlawed in Germany on safety grounds). Wheels remained the stylish 15-inch Fuchs alloys, and were six-inches wide at the front and seven at the rear.

Inside, cabin updates followed those of the 911 and 911S, although the Carrera was fitted with a smart 380mm leather-trimmed, three-spoke steering wheel.

The H series Carrera of 1975 featured extra sound insulation, colour-coded headlamp surrounds and, most excitingly, the option of all-new front and rear spoilers. The rear ‘whaletail’, as it became known, was larger than the previous ducktail and had a soft rubber edging that made it acceptable to the German authorities. It also created more downforce so was always fitted in conjunction with a front lip spoiler that was also rubber. These additions gave the 911 a much more aggressive appearance that would set the tone for future models.

The 2.7 Carrera is often touted as an affordable alternative to a Carrera 2.7RS, mainly because the two cars share the same engine (at least in non-US forms). However, the later car does not have the lightweight body panels or uprated suspension of the RS, nor does it have the same rarity value. That said, these are still desirable and fun cars to own and drive.