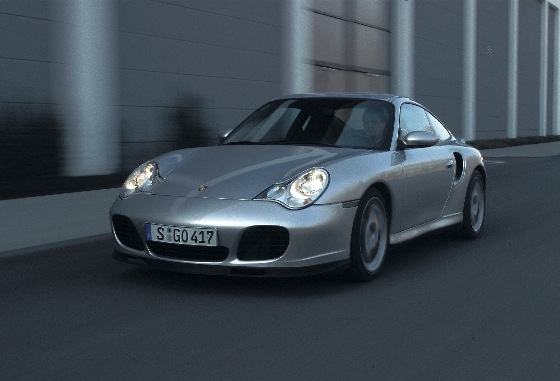 The 911 Turbo in 996 guise was a superb car, but in 2004 Porsche suddenly made an even better version. The 911 Turbo S had an output of 450bhp, thanks to a 30bhp power upgrade that had previously been offered as an option to buyers of the standard Turbo. The upgrade consisted of larger KKK turbochargers, uprated intercoolers and a revised engine management system. As well as the extra power (which peaked at just 5700rpm), the torque was increased from 560Nm to no less than 620Nm, which was available from 3500 to 4500rpm.

To keep this power in check, the Turbo S was fitted with Porsche’s ceramic brake discs. Made from carbon-reinforced silicon carbide, these were gripped by six-piston calipers that had a distinctive yellow finish. The advantage of these brakes, said Porsche, was that they were lighter, more responsive, performed better in the wet and would last for over 150,000 miles.

Visually, the Turbo S was identical to the 911 Turbo, but the 18-inch alloys were finished in GT Metallic Silver, a shade that was used on the bodywork of the Carrera GT supercar, with coloured Porsche crests in the centres.

Inside, there were one or two more changes. The Turbo S logo appeared on the door sills, centre console tachometer. The instruments themselves had a unique aluminium finish, while the leather of the seat centres, steering wheel rim, gearlever and handbrake lever have a special embossed finish. Standard equipment for the Turbo S included sat-nav, six-CD changer and cruise control.

These extras, plus the power upgrade and ceramic brakes made the Turbo S actually seem good value for money, despite being substantially more expensive than the standard version.

Cabriolet The 911 Turbo S was available in open-top Cabriolet guise, as was the standard Turbo.