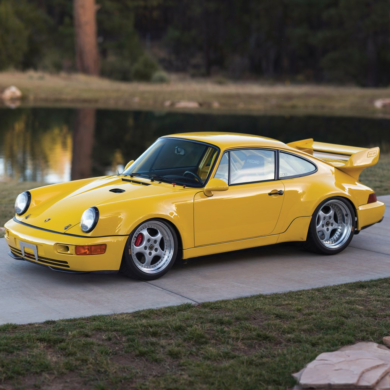 The RS 3.8 was developed as a road-going car so that Porsche could qualify for the GT racing championship with the full-race RSR 3.8 which race rules demanded be derived from a production model and appeared after the original 3.6-engined RS of 1992 had gone out of production.The bodyshell was that of a 3.6 911 Turbo bodyshell with flared front and rear arches (the previous RS had a narrow body). To compensate for the extra weight of the big wings, Porsche fitted unique lightweight aluminium doors as well as the 3.6 RS’s aluminium luggage-compartment lid and thin side-window glass. In fact, despite the wider bodywork, at just 1210kg the RS 3.8 was a full 10kg lighter than the previous RS.

At the rear was a massive adjustable rear spoiler, which was part of the one-piece engine-compartment lid. The spoiler can be set to one of six positions depending on the amount of downforce required.

And beneath this was a 3746cc engine. Based on the 964 unit, the extra capacity was achieved by increasing the bore by 2mm to 102mm, while the stroke remained at 76.4mm.

However, to get the power up from 260bhp to 300bhp, further changes were necessary. Lightweight pistons and rocker arms were used, together with individual throttle valves for each cylinder. Inlet valves were increased in size from 49 to 51.5mm and exhaust valves from 42.5 to 43.5mm, and the ports were polished. The compression ratio was raised from 11.3:1 to 11.6:1 and an additional oil-cooler at the front of the car helped keep temperatures down.

The inlet system used a compact hot-film air-sensor (as featured in the later 993 engine) in place of the restrictive flap-valve of the standard engine, while a free-flowing exhaust with twin tailpipes let the gases escape.

The gearbox was the 964’s five-speed transmission fitted with RS ratios, updated with steel synchronising cones and a limited-slip differential with a 40 per cent locking factor under load (instead of the 20 per cent of the previous RS).

The suspension was also lifted from the Carrera RS, but with revised damper and spring ratings, and larger, adjustable front and rear antiroll bars. The three-piece 18-inch light-alloy wheels were specially made by Speedline in Italy (they have ‘Speedline for Porsche’ etched into the rims) and were 9-inches wide at the front and 11-inches at the back. Tyres were 235/40 and 285.35 respectively.

Brakes were RS items at the rear and 3.6 Turbo ones at the front. The brake servo and ABS were retained, but power steering wasn’t.

When the car went on sale in Germany in 1993, it cost DM225,000 (which was then about Â£90,000). That country’s auto motor und sport magazine claimed that ‘anyone who buys a Carrera RS 3.8 to use on the road has too much money and too little sense.’ However, the car has gone on to become one of the most sought-after RSes of all time, partly because of its rarity, but also because it is such a great machine, both to look at and to drive.

The Turbo body makes the car look mean as well as low. Yet, there’s none of the bulkiness associated with the Turbo this car looks lightweight, somehow. The massive Speedlines add to the effect  remember that 964s came with 16-inch wheels as standard, so the extra two inches makes a noticeable difference. Without doubt, the best view of the Carrera RS 3.8 is from the back. That massive wing (complete with ‘RS 3.8’ moulded into the side pieces) perfectly complements the wide track, to give one of the most impressive rear ends this side of a 959.

The front end is somewhat less dramatic, but air-cooling ducts for the brakes and an additional lip spoiler distinguish this car from lesser 964s.

It’s a good job the 3.8 RS is so good-looking because admiring its lines lets you delay getting into the thing. The Club Sport spec (this is one of eight so finished) includes a welded-in full Matter rollcage, with bars going right across the door apertures. Incidentally, the Club Sport package also included a fire extinguisher, racing harnesses, harder brake pads and the option of a racing clutch.

Actually, getting into the cabin is much easier if somewhat maladroit than it looks. Once you’ve dropped into the lightweight and firm bucket seat, you fumble around to recover the buckle of the four-point harness which you’ve unavoidably sat on. But before restricting your movements by strapping yourself in you take a moment to check out the immediate surroundings.

It’s all very much RS Lightweight stuff. The doors are clad with flat panels, and there are simple pull-straps (partly obscured by the rollcage) for opening and closing the doors. Windows are wound up and down with flimsy handles.

There’s no roof lining just the metal panel which is painted blue, as is the rollcage. The inclusion of the cage, incidentally, has meant the cutting away of some of the trim around the ends of the dash and door tops, which has been done none too neatly.

There’s no radio, of course, just a thin plastic panel covering the aperture. The petrol-filler flap release is just a simple loop of wire, as is the battery kill switch, and there’s a gorgeous three-spoke RS steering wheel.

So there’s no doubt whatsoever that car is a road-going racecar. Nothing more, nothing less. Which means it would be rude not to have some fun with it.

Batten yourself down with the bright-red harness (after remembering to close the door first you can’t reach it otherwise) and turn the key. The engine fires up and sounds almost disappointingly refined. It does, though, settle to a rather lumpy idle. Blipping the throttle reveals a higher-pitched exhaust note than expected this is not a car that’ll have the ground shaking.

The engine actually feels more like a 993 than a 964 unit. Which, in many ways makes sense because it’s a sort of halfway house between the two. In fact, a similar 3.8-litre engine was later offered as an option to 993 buyers. It’s very free-revving no doubt due in part to those six throttle-body valves. Which is a good job because you don’t hit maximum power until 6500rpm, which calls for some nifty use of the slightly notchy gearbox the redline is just above at 7100rpm.

At such high revs the engine really does scream behind your head. Again, though, it’s not a deep, throaty sound, more a mid-range howl. It certainly sends shivers down your spine. This is not a dramatically fast car (it’s geared for acceleration, not top speed), but 300bhp in such a light body gives stunning acceleration, which is undoubtedly better than that of the 3.6-litre-engined Carrera.

Torque peaks at 265lb/ft at 5250rpm, but the engine lacks the low-down torque of the 3.6 engine, so again, you’re making good use of the gearbox this is not an engine you can be lazy with and pootle along at low speed in a high gear.

But then this isn’t a car you’d want to be lazy with. Everything about it urges you to drive it hard. It’s a surprisingly easy car to drive, too. The suspension set-up makes the car less skittery and more forgiving than a standard RS and it’s a remarkably compliant ride, too firm, but not teeth-shatteringly so.

The compliance inspires you with the confidence to push hard through corners, safe in the knowledge that the slightest bump isn’t going to knock you off line. The car feels extremely surefooted because of this and maybe the wider track and those enormous tyres help as well. It’s funny, in a Turbo of this age, you’re always aware of the extra bulk. Not so the RS 3.8. It feels as compact and nimble as the standard RS, but at the same time noticeably more refined. Porsche’s chassis development had certainly moved on in just a couple of years.

The 3.8 RS offers a sublime driving experience. It’s involving and raw, yet refined at the same time. Porsches don’t come much better than this!

The number of RS 3.8s built is hotly disputed, with the total put at between 20 and 100 cars. What is known, however, is that just eight of those were made to the stripped-down Club Sport specification (although the cars were not actually called such).